Rejoice! Winter is over and the GAA is back 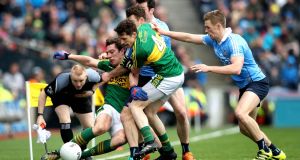 “The days are short, the sun a spark. Hung thin between the dark and dark.” That was John Updike’s take on January. Updike was more a golf man, truth be told, but thousands of GAA fans will identify with the great scribe nonetheless this weekend as they venture out and bundle up for league matches before the first month of the year is out. Thin indeed will be sightings of the sun as we trudge along.

The inter-county seasons in both football and hurling have been fairly rinsed through the spin cycle this year, what with the new schedules and the far-off stranger danger of the reformed championships. The fact that nobody knows quite what to expect from it all lends this Allianz league a certain anticipatory frisson from the get-go. No doubt it will have worn off by the time the first rain shower comes lacing in on the winter breeze but for now we have a stack of puzzles to warm us.

Top of the pile is the perennial question of the league – to whose real benefit is it to go out and actually win the thing? In football, the All-Ireland champions Dublin get their season under way against Kildare in Croke Park tonight, keenly aware that Jim Gavin’s way has always been to end every competition collecting tin if possible but also that easing themselves into 2017 didn’t do much harm either.

Dublin went unbeaten through the group stage of the league last year but they did well to squeeze out last-ditch draws against Tyrone and Kerry along the way. With no history-making streak to propel them this time around and, more pertinently, with the prospect of the Super-8s sure to flavour all considerations even this far out, it’s not difficult to imagine them dropping a game or two here and there.

Everyone is vulnerable in the new arrangement. Or at least they’ll let on to be. The poor-mouthing is going to be ferocious. In Division One of the football league, Kerry, Galway and Donegal are already down veritable phalanxes of injured bodies. To listen to some of the talk, it’ll be a wonder if half the teams manage to field this weekend. Monaghan barely made it back training in time for the Christmas break, seemingly. Mayo people don’t want to see anyone who played in last year’s All-Ireland final this side of July.

League champions Kerry start their defence tomorrow in Fitzgerald Stadium against Donegal. The quirk of the new fixture calendar will mean that for the 16th year in a row, Kerry will not be winning a game in Killarney in February – their other two home games in the 2018 league are in Tralee. By the by, Kerry’s four away games this time around are against Mayo, Monaghan, Dublin and Tyrone – given his injury list, if Éamonn Fitzmaurice can fashion a title defence out of that slate of fixtures, the summer will take on a pretty encouraging look in the Kingdom.

Or so we imagine, anyway. Talking to inter-county managers in the past fortnight, the general feeling around the leagues in both codes is that nobody knows what lies ahead. Not really. In hurling, we’re in for some twilight zone stuff in the coming weeks. More than ever, this league will be a prep-run for the championship.

Not alone will teams be trialling players – and more of them than ever – but they will be trialling methods of recovery, logistics, workarounds for all the lumps and bumps that are coming their way in May and June. You get the feeling that whoever finds themselves in the league final will have backed into it almost by accident.

That said, once the ball is in and the game is on, it will be no surprise to see the hurling bend towards the light as it always does. Cork play their first game in the new Páirc Uí Chaoimh tonight, with Kilkenny the guests and the Eir Sport cameras in position. The preponderance of youth on both sides will take some getting used to – several of the Cork players weren’t walking yet when Brian Cody took became Kilkenny manager in late 1998.

The eternal Cody will be there on the sideline, having escaped without sanction after being sent off in the Walsh Cup final last weekend against Wexford. Still there, in his 20th season, grabbing hold of the rock and pushing it up the hill again. The more things change, etc.

Winter is over (almost). The games are back. Let’s play.

1 Sports nerd heaven: Irish elite logging on for Analytica Zoom part two
2 Munster braced for worst of financial crisis due to Thomond Park debt
3 Gerry Thornley: Home and away Six Nations could be its ruination
4 Liverpool among clubs to argue against paying €384m TV rebate
Real news has value SUBSCRIBE