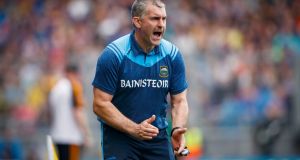 Liam Sheedy: “There should be an adaptability to any particular day or conditions, that is going to be really important. We have that within the squad.” Photograph; Oisin Keniry/Inpho

It’s unusual for any county manager to declare himself “the luckiest man on earth” but Liam Sheedy has his reasons.

Two and a half years ago he had a ‘sliding doors’ moment when he was shortlisted for the role of GAA chief executive along with former president Liam O’Neill and now incumbent, Tom Ryan.

Within months Sheedy had instead graduated to another project, getting Tipperary back on track for an All-Ireland after two disappointing years since their previous title in 2016.

Mobilising a serious backroom team to optimise preparations for a generation of talented players, whose two All-Irelands felt like underachievement, he duly delivered the championship – just as he had in his first tour of duty a decade previously.

Now he is preparing for perhaps the strangest season in GAA history, which starts for Tipp this Sunday and will fly by in six weeks if they make it all the way back to the All-Ireland.

He knows though that he could have instead been in the middle of trying to pilot the GAA through the administrative and financial crisis of the coronavirus pandemic.

“I must be the luckiest man on earth, that’s all I can say. No, you would feel for Tom and it’s really difficult in any association. People and members are always looking for certainty and as an organisation we thrive on certainty but we’re in a time when we can’t give certainty because the thing is always moving and moving at a pace.

“Overall, the GAA have been superb but it has been a difficult time for John [Horan, GAA president] and for Tom and I think they have tried to make the decisions to give themselves the best chance of a good outcome.

“They have shown they will make whatever decision is right to ensure the safety of our members, which is paramount. What they have done in every community right across Ireland over the last number of months has been superb and probably is not something that you can roar and shout about but I think for the people in the communities they can see it for themselves.”

Not that guiding Tipperary to a successful All-Ireland defence is a soft option. Sheedy jokes that having stepped down – after a career promotion – in the immediate aftermath of the 2010 success after three seasons in charge, last year’s Liam MacCarthy Cup, albeit nine years later, represents a personal back-to-back.

By more conventional measure, though, that achievement hasn’t happened for the county since 1964-65 despite six opportunities in the meantime during which other counties have managed to do so on 11 occasions.

It’s almost poignant recalling his enthusiasm for the coming year and the opportunity to set that record to rights when looking back at the end of a successful season during the 2019 All Stars trip to Abu Dhabi.

It’s the second year that he’s had to cope with a novel format. Last year was Sheedy’s first experience of the provincial round-robin system and like everyone else he’s now getting ready for a speed-dating version of the championship.

There is a relevance to Sunday, though. The only speed-bump last year, and it was considerable, came in the Munster final. After a 100 per cent romp through the group stages by a double-digit margin, Tipp were demolished by Limerick, their predecessors as All-Ireland winners and this weekend’s opponents.

When he reflected on the year last December, Sheedy talked about the challenge of that round-robin format and the extent to which the big reverse in the provincial final enabled the team to reset.

“It’s very difficult to win eight matches out of eight. That’s the thing and if you do have a blip in the road – we were lucky in that our blip came at a time when we could recover at the start of effectively a new championship. Now, if you ask me honestly, had I choice between winning the Munster final and losing the Munster final, I would have chosen to win it.”

He also referenced how the extended programme had allowed players like Séamus Kennedy, who’s injured for Sunday, and Barry Heffernan, neither of whom had been originally in the frame, time to build up a head of steam and form and finish the championship really strongly in the All-Ireland final defeat of Kilkenny.

Tipperary’s offensive ceiling looked higher than anyone else’s last year when they brought their A game of well-considered deliveries into a potentially lethal full forward line. In advance of this winter championship, the manager is asked about how conditions may impact on that high-tempo attack.

“The importance of winning your own ball and transferring that ball really efficiently to the right parts of the pitch so you can dismantle the opposition will still hold true.

“We still have a good quality of striker in our team, both in terms of the tried and trusted guys and the younger guys that are coming through. There should be an adaptability to any particular day or conditions, that is going to be really important. We have that within the squad.”

Amid the stresses and difficulties of preparing a team in the time of Covid, he emphasises however the obvious priority.

“We are all trying to manage it as best we can but I want to stress that we take our players and their safety really seriously. We are very committed to ensuring that the environment we create week in week out is the safest we can create.”