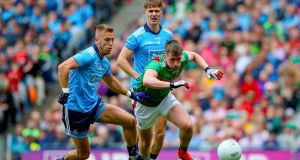 Cillian O’Connor in action for Mayo against Dublin in last year’s All-Ireland semi-final. “We’re still as hungry as ever to win it, it’s a different type of championship, but no less valid that any other one.” Photograph: Tommy Dickson/Inpho

The light on the Zoom call is a little sublime and maybe the sound too and still Cillian O’Connor appears born again, the body language talking purely positive if only in the virtual sense.

Sunday’s defeat to Tyrone on Sunday may have consigned Mayo to Division Two football for the first time in 23 years, although that’s still open to possible revision, and besides O’Connor has more important things to look forward to – starting with this Sunday’s Connacht senior football championship opener against Leitrim.

O’Connor missed the Tyrone game on precautionary grounds, nursing a minor leg injury after the impressive win over Galway the previous week, which was actually his first game for Mayo in 14 months; no wonder he looks and sounds so re-energised for what will be his 10th championship season, having made his debut as a teenager back in 2011.

“I think the lay-off has allowed players time to rehab injuries, do some future-proofing against knocks hopefully,” he says. “But also the mental side. It’s given us time to take a step back, step out of the bubble for a few months, and just appreciate the position we’re in.

“Sometimes you do get so caught up in the whole hamster wheel of it, racing from session to session, from club match to club match. I’m not saying it happens to everyone, but there might be times you take it for granted, speaking for myself anyway, I’m just relishing the opportunity to play for Mayo again, just the sport you love, even before the winning or losing comes into it. Just to take to the field again, that’s definitely re-energising.

“And it was 14 months in all, between Mayo matches. I actually couldn’t believe it myself, when I was looking at the diary, trying to work it out. It was my longest period ever between games. I was coming back for the Galway game back in March, buzzing fir it, and then it got pulled at the last minute. Such is life.

“I’d a knee injury from the tail end of last year, was rehabbing around that, building up strength after an operation from the previous year. The plan was to hold off until the last two league games, and then the whole thing got pulled. So for someone who hasn’t played for so long, it’s been great to be back, and definitely re-energised that way. Even having corner backs hanging out of you is enjoyable.”

At age 28, O’Connor smiles at the suggestion he’s now one of the older Mayo players; however, the championship all-time top scorer and 2014 All Star admits that the Mayo newcomers Oisín Mullin, Eoin McLaughlin, Mark Moran and Tommy Conroy have helped roll back a few years

“Exactly, they have such energy, and there’s no over-analysing or thinking for them, and that’s infectious, putting up their hand for a place, doing well at the weekend. That adds to competition, but they’ve given the whole place a life as well. Not naivety, but enthusiasm.

“Something that was needed maybe, at end of 2018, not so much change of scenery, but you do have to be thinking about the future, and maybe there was an old cohort of players. It is infectious. They are flying in training and they are cleaning some of the established players maybe and they are putting up their hand for a place.

“And then you see them go out the weekend and do really well and it really adds to the competition in the squad. Somebody coming back from injury last year is suddenly sweating and they are thinking, ‘I am not being rested anymore, my place is gone here’, and that brings its own intensity to training.

“After such long lay-off, there was a huge appetite for the training sessions too, and having a lot more players living back west has helped as well. The championship being so short, you have to have players to step in, if a players are injured.”

After co-starting a recruitment business last year, Spot Recruitment, and opting out of teaching, O’Connor has been working from home lately too. Speaking at the launch of AIB’s sixth season as sponsors of the All-Ireland football championship, he acknowledges the lack of crowds this year may or not suit Mayo, but either way he’s mad for the road.

“I think everyone is kind of wondering about the crowds, and what effect it will have on the psyche of the teams. I think it works both ways. If Dublin score a goal into the Hill, you’ve all heard the roar and the lift it gives them. It works the other way, if someone misses an open goal, or drops one short, the impact that noise has on the player’s confidence is equally demoralising on the other side. It’s definitely going to be interesting.

“We’re still as hungry as ever to win it, it’s a different type of championship, but no less valid than any other one. It won’t be diminished for me.”