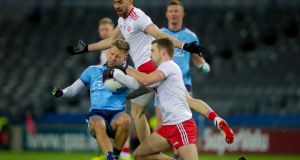 There was a bit of history in the air at Croke Park on Saturday night but for the modest crowd of 19,927 the talk was more of portents. Dublin for the first time in the Jim Gavin era have failed to qualify for the Allianz Football League final, as a sharp and impressive Tyrone extended a good spring record against the holders on Jones’s Road.

It was also the first time Dublin have lost three matches in a league season since their manager took over. How all this impacts on the main business of 2019, the prospect of an unprecedented fifth successive All-Ireland, remains to be seen this summer but it’s fair to speculate that the markets are jumpier than they were in January.

For Mickey Harte, in his 300th match in charge of Tyrone, it may have been a first win over the Dubs since 2013 – six years to the day – but in that time over five league visits they have been beaten just once.

He wasn’t getting carried away, but the outcome represented a pleasing evolution since last September’s All-Ireland final against the same opposition, which they were fortunate to lose by just six points.

“You have to be careful,” he said. “It’s a stand-alone game. It’s a good result and we’re very happy with it tonight but you can’t make that as a template or a foundation for saying you’ll beat anyone else.

“Dublin know that they’ve got a target on their back. When people meet Dublin, they’ll want to bring out their best. That was our incentive tonight – bring your best out because you’re playing against the best. To be able to do that again, against a team that hasn’t got that reputation, that’s a different challenge, so we have to see how we deal with that challenge now.”

He was right to be happy with the performance. It incorporated coping with being a man short for the last quarter after Niall Sludden had added a black card – for a pull-down off the ball in the 51st minute – to an earlier yellow.

As in September’s final, Tyrone started well, with a point in the first 30 seconds from Matthew Donnelly, who would go on to have a big impact, but when they conceded a fourth-minute goal in what was Dublin’s best moment – a lightning break from defence and a dagger finish to the net by Cormac Costello – they didn’t panic and simply re-established their superiority.

Dublin were wayward in their shooting and prone to error. Injury also assailed them, as both John Small and Costello had to be replaced in the first half, the latter by Paddy Andrews, who himself lasted just 15 minutes before being carted off after a flying lunge by Niall Morgan, which got the Tyrone goalkeeper yellow-carded.

Key to the visitors’ success was the increasingly influential deployment of Donnelly and Cathal McShane as a two-man full-forward line, which yielded 1-7 over the course of the match.

McShane was named by the man of the match, a fair reflection of his impact, as yet again Dublin proved fallible to early ball attack. David Byrne laboured to keep up with McShane and crucially slipped when the Tyrone man got a run at him in the 21st minute and expertly took the goal.

At half-time the lead was 1-7 to 1-5 and the holders had work to do to get back into the match. But at no stage did they succeed in building one of those scoring bursts that typically puts matches like this beyond the opposition.

Tyrone’s economy continued, as did their ability to open up Dublin with clever long ball into attack.

Dublin shaved the deficit back to two on a couple of occasions but Harte’s team were picking them off like a boxer, bobbing and weaving, and points from McShane, Peter Harte and both Donnelly and his brother Richard, plus a good free from Morgan kept the holders at arm’s length.

Dublin flurried at the end without looking likely to produce the goal that might have turned around the match.