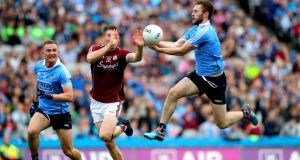 Dublin’s Jack McCaffrey gets to the bounce of the ball ahead of Galway’s Johnny Heaney during the All-Ireland SFC semi-final at Croke Park. Photograph: Ryan Byrne/Inpho

The view from upper Hogan has Jack McCaffrey all hockey smiles in the parade, plucking familiar faces from the 54,716 audience. Two Palestinian flags fly highest on Hill 16. Eoghan Kerin welcomes Paul Mannion to the same end as blue smoke billows. Plenty of evidence that a genuine contest will follow but when the chest bumping ceases Mannion scorches the corner back to hit the first of four energy-sapping scores.

Ciarán Kilkenny doesn’t kick mere points, he enters the consciousness of the game, controlling the rhythm with statements. Galway rally off Shane Walsh and Johnny Heaney to end a run of five magical white flags – began by Ian Burke with Mannion and Kilkenny contributing – that leaves Dublin barely ahead 1-9 to 1-7 at the turn.

Plenty happens in between. Like John Small attempting to rough up Walsh. Small would be forgiven for having no idea about the score, so consumed was he by his singular duty. Walsh destroys him for pace just once but Cian O’Sullivan stitches the thread before it can tear. This feels like a game-defining duel and for long periods Walsh does nothing around the middle, patiently waiting or suffocating – Small keeps patting his opponent’s chest as if to remind him of their intertwined existence.

See O’Sullivan flick the after burner switch only to tweak that dormant left hamstring. The glue that binds Dublin’s defence, he tries to run it off but is whisked away for cryotherapy or whatever healing can be done in three weeks. Mick Fitzsimons arrives as Johnny Cooper becomes Cian O’Sullivan for the remainder. Galway are buoyed by the champion’s loss.

“Just tightness in his leg and in a championship game like that you need to get him off and put a fresh player in,” says Jim Gavin from beneath a peaked Dublin branded cap. “The medical protocols kick-in and the next 72 hours will tell us more.”

Galway have a goal in their locker after seven minutes. Timely, to say the least, as Dublin ease into a 0-3 head start via Dean Rock frees.

Was Stephen Cluxton to blame with the muscular Damien Comer out leaping Philly McMahon for a punched finish?

Probably, but the Dublin captain atones.

Unforgivably, Galway fail to take a second goal when Cooper drags Comer to earth. Eamonn Brannigan puts the penalty low to Cluxton’s left but he was waiting. Walsh fluffs the 45.

Galway leave far too many scores out there.

“We should have been leading at half-time,” admits Kevin Walsh. “Our lads were competitive for a long time, it was great to get this experience. We just have to keep trying to close the gap.”

The gap is a chasm.

Remember Con O’Callaghan (soon to be replaced as young footballer of the year by Brian Howard/David Clifford). Quieter this summer, O’Callaghan finishes the Dublin goal on 26 minutes after clever distribution by McCaffrey and Niall Scully.

This feels like the usual Dublin hammer blow but it was O’Sullivan’s hammer that goes.

McCaffrey almost conjures the oddest goal we would ever have seen and laughs to himself when Ruairí Lavelle bats the fingertip effort out for a 45. A rare sentence follows and follows. Dean Rock misses.

McCaffrey, sensational either end of the field, guarantees control of possession and when this occurs there is only ever one result.

Kilkenny’s third strike of the day eases Dublin into a four-point lead with 46 minutes clocked. Rock quickly adds another wide but it barely registers.

The fourth All-Ireland is on the horizon now. Rock stops the rot with a free stretching the deficit to five.

Inspiration is desperately needed to save the contest from inevitability. The unbeaten Brian Fenton disagrees with a monstrous mark. The quick ball to O’Callaghan has Palestinian flags waving again. Then Rock, on a bad day, lands his fifth.

McMahon gives the Hill a laugh, feigning pain, as whatever he says after Comer’s latest miscue prompts a dunt in the ribs.

Galway hang in there, their middle holds but little else in a season when they pass out Mayo but are nothing like them in the face of Kilkenny, McCaffrey, Fenton, Howard, Mannion, O’Callaghan – these young unstoppable blues.

“We’ve had some really good displays in the summer so far,” adds Gavin when asked if this was the best showing of 2018. “I’m just happy with the team performance, not only the guys who finished the game for us but in the shadows there is another cohort of players pushing really hard.

“The culture and environment the players have built themselves is all about the sum of their parts. We know they will do their best for Dublin.”

We see and believe.

1 Henshaw the only change as Andy Farrell names Ireland team for Paris
2 Gordon D'Arcy: Ireland must go after victory by frightening France into mistakes
3 Warren Gatland: England players could miss Lions tour if not released for Japan warm-up
4 Cian Healy: ‘Realistically I got away with murder when I was younger’
5 Cork City expected to approve €1 takeover by Preston owner
Real news has value SUBSCRIBE

Henshaw the only change as Andy Farrell names Ireland team for Paris 13:45
Warren Gatland: England players could miss Lions tour if not released for Japan warm-up 12:19
LA Dodgers land World Series to end 32-year drought 08:38
MCG could welcome 25,000 fans for Boxing Day Test 08:21
Gordon D’Arcy on a Halloween thriller; Will an empty Hill derail the Dubs? 07:51
Crossword Get access to over 6,000 interactive crosswords