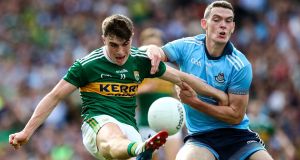 Put two kick-outs over the sideline but cannot be heavily criticised as a wealth of his balls found Kerry hands at the peak of their leaps. Rating: 6

Struggled on Dean Rock who kicked two vital scores from play and out muscled by Con O’Callaghan (then again, who wasn’t?). Rating: 5

Looked like he might follow Paul Mannion into the lower Hogan on 67 minutes but the shadow job was well executed as the Kilmacud Crokes man was kept to 0-2 with no score in the second half. Rating: 8

Blessed to finish the game after avoiding a second yellow for a 52nd minute foul on John Small which looked similar to the act that got Jonny Cooper booked. Rating: 6

Sparked the memory of Tomás Ó Sé racing up from wing back but the difference was he turned away after shots in the 30th and 41st minutes, the second which Cluxton touched onto the crossbar, with no change to the scoreboard. Scores Ó Sé always seemed to register. Rating: 5

Silenced the chief Dublin player. Ciarán Kilkenny was a peripheral figure until dropping as deep as can be imaginable to control Dublin’s and the game’s last attack. Rating: 8

Fascinating tussle with Niall Scully - the pair of them all but cancelling each other out - before exiting the stage to allow Tommy Walsh blockbuster cameo. Rating: 6

Clean catches on 49 and 65 minutes will live beside anything Jack O’Shea or Mick O’Connell have done to edge Kerry right to the edge of a magnificent victory. Rating: 7

Heroic fielding. Brian Fenton was unable to turn Croke Park into his own private playground as Barry continued to hold at least a partial Indian sign over his Raheny rival. Rating: 7

Initially tasked with tracking Brian Howard but there was a better chance of catching a fly in chop sticks than shackling such deep lying movement. Rating: 5

Struggled on Jack McCaffrey, who was perilously close to being the unmarkable man who broke Kerry, but he was not alone. However, White did show well when sweeping. Rating: 5

A performance to rival anything seen by Mike Frank Russell or Declan O’Sullivan on this day or days. Nerveless free taking, magnificent 45s and a vital 0-3 from play having spent the early moments dropping deep to create goal chances with long, accurate kick passing. Rating: 9

Not the thrilling impact of the semi-final but a stunning point on 13 minutes could so easily have been a goal. Rating: 6

Shaky start with three balloons before he masterminded the dismissal of Jonny Cooper and kicked a marvellous point on 49 minutes despite being in the full embrace of Mick Fitzsimons. Rating: 7

Scored nothing and the penalty miss lacked pace while being placed at the perfect height for Cluxton. Still, he was superb rooting out balls for others. Rating: 6

Tommy Walsh was a masterstroke, setting up Killian Spillane’s goal, clipping a lovely point and getting on some crucial ball. Rating: 8