Dublin’s press pack can be the headline act against Kerry 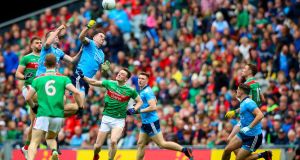 In the fallout from Dublin’s second-half undressing of Mayo in the semi-final, there was nothing for it but to pick your numbers and pop the sail to catch their wind. For some, it was the 2-6 without reply in the 12 minutes after the break. For others, it was 1-5 in seven minutes. No matter where you made your cut-off, the point was the same. Dublin changed everything we thought we knew about the day, bouncing Mayo out the door with a savage abruptness.

Those numbers only tell you the what, though. If you want to know the how, here’s a better one. Con O’Callaghan’s first goal started away back up the other end of the pitch with a Paddy Durcan attempt that landed on the crossbar and bounced out. Durcan took his shot with 36:18 on the clock. The next time a Mayo player touched the ball in the Dublin half of the pitch, the clock said 42:24.

For six minutes and six seconds, the game was played exclusively inside the Mayo half. By the time they finally got out, Mayo had gone from being a point up to six down. Robbie Hennelly took five kick-outs in that spell. Dublin won four of them and, for good measure, bottled Durcan up to win a free off the only break Mayo managed to snaffle.

This is the fearsome Dublin press. The ultimate in Gaelic football jiu-jitsu. In a sport where possession is everything, they revel in turning your own against you. You want the ball, don’t you? Well, here it is, 35 to 40 times a game. Now what are you going to do? They hand you the holy grail and make you drink arsenic out of it.

Niall Morgan was that soldier on this day last year. For the first 17 minutes of the All-Ireland final, he and Tyrone had been doing just fine. He’d taken five kick-outs and regardless of whether he went long or short, middle or wide, Tyrone had won them all. Dublin’s shooting was wonky in the opening exchanges so it all added up to a 0-5 to 0-1 lead. Happy days.

And then. Cathal McShane dragged a bad one wide, Cluxton speared a work of art out to Jack McCaffrey on the Cusack Stand sideline and the Dubs found their mojo. For the next five minutes and 23 seconds, no Tyrone player touched the ball in the Dublin half. Morgan went from nailing every kick-out to losing every one. Three coughed up in a row led to 1-2 conceded. Oblivion.

“Even in your own dressing room you don’t get much sympathy from people,” Morgan says. “They’re almost looking at you like, ‘Why are you not hitting this to me? I’m free.’ They don’t realise that there’s four Dublin men within a five-yard radius of them.

“One night at training this year, Gavin Devlin actually came and stood behind me as I was taking all my kick-outs. And after training he said to me, ‘That’s mental. I couldn’t see anything you were kicking to. Until you actually stand behind and get the goalkeeper’s view, you don’t know.’

“The camera angles don’t show it. Even the one behind the goal is looking down on the field, it’s not showing you what the goalkeeper is seeing. That high camera tells you that there’s maybe four or five people free for a kick-out but we can’t see any of them because Dublin have a wall in front of us.”

At the top level, every goalkeeper gets their dose of it. Mark Donnellan has had it three times in the past five years for Kildare. You’re fine and then you’re not. You can see the field and then you can’t.

“Sometimes you’re just looking up and all you see is bodies so you’re actually just trusting where you’re kicking it,” Donnellan says. “You’re not able to see the space but you kind of know it’s there, just through experience. But really, you’re just looking at a wall. There might be space behind that wall - well, there is, definitely, somewhere - but it’s hard to see it.

“They push up two banks, one in the full-forward line and one in the half-forward line. They play it zonally, cutting off different areas. It makes it difficult for backs to find space because they’re moving, they have their hands up, etc . . . As well as that, they push defenders up and gamble, giving them extra bodies around the break in midfield. As a result, the team that’s defending against them is pulled out of position and is very vulnerable straight away.”

In terms of basic structure, Dublin generally set up for the opposition kick-out in three lines. The only tweaks they make is how many players they commit to each line. It always starts with three or sometimes four in the full-forward line and then anything between three and five across the 45, followed by between two and four across the middle.

When they really put on the squeeze, they can have anything up to 12 players between the opposition 20-metre line and the midfield mark. That was the case for Hennelly the last day, for the second kick-out of the five in that killer spell. He had fluffed a short one a minute previously and so, sensing that he was dying to go long this time, Jonny Cooper and David Byrne both left their men and pushed up past their own 65 and into midfield.

The Dublin set-up by the time Hennelly got his kick away was three in the full-forward line, five across the Mayo 45 and four in midfield. It must have felt like trying to throw an apple core into a bin from a low-flying helicopter.

“It’s very hard to prepare for it,” says Morgan. “The reason it happens first of all is that Dublin attack so well together. Their whole team will come forward together and that allows them to set up their press for the kick-out once the attack finishes. That’s not the same with defensive teams or counter-attacking teams. If Tyrone counter-attack, we would have five or six bodies attacking together. That means when the kick-out comes, those five or six men are the ones pressing the kick-out.

“The difference with Dublin is that they’re almost like a basketball team. They all come forward together. Not, obviously, in the same lines. But together as a unit. And what it means is that they’re already filling out the zones for the kick-out as the attack is happening. As soon as the ball goes dead, no matter how quickly I or any keeper gets the ball out on the cone, they already have it set up. Straight away, you won’t have that short option that you would usually have on.

A few years back when playing for Ireland in the International Rules, Morgan watched as the Aussie defenders abandoned their posts on Conor McManus and Michael Murphy to go and join the fray in around centrefield. He has no doubt now that the Dublin brains trust were watching as well.

“I read somebody there the other day going, ‘Kerry have to kick it long to David Moran and once he gets it, he’ll have three free men inside to play it to.’ But if that’s the case, you have to ask yourself why those men are free. And the reason they’re free is that Dublin defenders sometimes leave their men - like Australia did against us - to go and add numbers around the breaks in midfield. With that many bodies, Fenton and Macauley don’t have to catch anything, just break it.

“Now if I was to go into the Tyrone dressing room and say, ‘Here’s an idea - we should leave Con O’Callaghan and Paul Mannion free inside with no markers for the Dublin kick-outs’, everybody would have a hernia. But they’re willing to do it.

“It’s a case of, ‘Are you going to be brave enough to match us and do what we do?’ And a lot of teams aren’t. Us included, I suppose. We tried to push up ourselves a good bit this year but it takes time and it takes a lot of bravery. This isn’t a thing that Dublin have created overnight. It is so impressive to see it done. It’s crazy how good it is.”

As for how to handle it, calm is your friend. If you can’t quite make it your friend, then at least get into an arranged marriage with it and present a good front. Nobody needs to know your real feelings.

“Sometimes you can do some stupid things,” says Donnellan. “But you have to take each kick-out as it comes and revaluate after each one and readjust. You’re probably not going to face the same set-up twice. Each one is different. You can have all the plans in the world but sometimes it’s off the cuff and seeing different things, finding different spaces and different players.”

And if Morgan had one piece of advice for Kerry goalkeeper Shane Ryan tomorrow?

“The biggest thing I’ve learned is to stay calm if the first one doesn’t happen straight away. Sometimes the right option won’t present itself until after 20 seconds. That happens a fair bit - the two teams have pulled each other all over the place with different runs and all of a sudden you have a man standing absolutely free just outside the 45. Your job is to stay cool enough for that space to open up and then to be brave enough to clip it out.

“Goalkeepers 10 years ago wouldn’t even have the ball out on the line inside the first 15 seconds. And then they’d have another 15 seconds before the crowd starts roaring and shouting at them to hurry up. So they were getting 30 seconds for a kick-out before they had to start worrying.

“Whereas because we have the ball out so quickly now, everybody starts going absolutely mental if we don’t have it kicked away inside 10 seconds. Now in fairness, I do think the referees have taken that into account and given us a bit of leeway. But it’s still hard to keep your cool.”

In the Dublin gameplan, the cool of an opposition goalkeeper is a target rich environment. Ryan’s must survive the day for Kerry to have a chance.