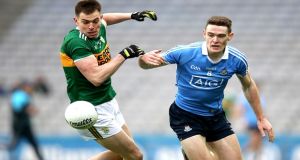 Jack McCaffrey had only five possessions in general play during Dublin’s semi-final win over Mayo – the reigning champions still won the match by 10 points.

That transpired even with the 2015 Footballer of the Year held by Patrick Durcan to four hand passes, no assists and no attacking contributions.

Mayo needed to get every single match up right, and then be more clinical than ever before. One huge individual battle was won but it was not nearly enough. There were too many fires but not enough Durcans and Lee Keegans.

In the final Kerry will also identify Dublin’s main threats, but their approach will be less reliant on match ups, more about defending and attacking as one with, they will hope, ferocious intensity and conviction. They have firepower of their own and they’ll back those lads to do more damage, if they can get their share of quality possession.

To do that they’ll need to win midfield where, this time, one major match-up could prove the difference between threatening an upset or allowing the prescribed script to run out.

Against Mayo, Brian Fenton was given a tough battle by his midfield opponent Séamus O’Shea who scored a good point and stuck tight before being taken off on the hour mark.

By then Fenton had caught two spectacular marks and claimed another kickout after a bit of juggling with it on the way down. He’d just scored a goal, kicked a wide in the first half and had been pulled up for charging on another surge into the scoring zone. After O’Shea’s departure he broke through again but had his second goal effort tipped over for a point by an excellent Rob Hennelly save.

How do you stop that? Well, Kerry have actually been doing a pretty good job of it in their recent meetings.

Fenton has contested 33 kickouts this summer and made seven catches

Kerry’s last four clashes with Dublin have all been in the league – and in all of them Jack Barry has marked Fenton. The Kingdom have won two, drawn one, and lost the other. Barry has held Fenton to 0–1 across the four contests.

When you consider he has scored 3-8 from play in six matches this summer – making him Dublin’s third top scorer from play – that is quite the achievement.

The Raheny man scored that one point in the last meeting between the teams, Kerry’s win in Tralee six months ago. It came in the 66th minute of the match.

Fenton is an incredible athlete for a big man – 6ft 4in and 90kg. He never stops moving and can go from a jog to flat out sprint with ease. And on repeat, changing direction and pace as if he was being controlled by an analog stick. Few midfielders can stay with him around the field, especially not over the full 70 minutes.

He has scored 3-5 in the second half of matches this summer, and seven of those eight scores came in the final quarter of the match.

During the closing 10 minutes the big midfielder had 10 touches and Dublin outscored Kerry 0-4 to 0-1. Dublin won no other 10 minute period by any more than a point, and on the two occasions they did so he recorded his next two highest involvements. Four touches between the 10th and 20th minute and six between the 30th and 40th.

Against Galway a week earlier he’d had 19 involvements in the final 20 minutes as the Dubs outscored the visitors 1-6 to 0-1 in Croke Park. So Fenton’s strongest period is the final quarter, and that’s when Barry will have to be most aware of the threat he poses.

Kerry have been limiting Fenton’s two main outputs, his scoring and also, his fielding. Fenton never contested a single kickout in Tralee. Against Galway a week earlier he had ruled the skies after contesting 10, nine of them were Galway restarts.

In this year’s championship semi-final Mayo kicked four long kickouts on top of Fenton, three of them in the second half. The Dublin midfielder came down with two. Keeping your own kickouts away from him is half the battle.

Despite clearly avoiding Fenton’s zone, Kerry still retained over 81 per cent of their own kickouts. And only a third of them were taken short. While Dublin, as usual, went short or targeted a free runner for the majority of their restarts. Only two of their restarts made it past their own 65 in Austin Stack Park.

Fenton has contested 33 kickouts this summer and made seven catches. Exactly two thirds of those contests were from opposition restarts as were four of his catches. Catches in the modern game are at a premium but still a massive momentum catalyst when they are made.

Jack Barry is another rare sort of midfielder. A half back for much of his Kerry underage career, he is a very disciplined team player. A powerful runner with a big engine, he’s physical too and will track Fenton’s long bursts and stick touch tight and goal side as he floats around the middle trying to link the play.

And like any good marker, he is well able to attack himself and put his man on the back foot. Barry’s pace and ball carrying, as well as his ability to contest kickouts, particularly on the wing side, asks unique questions of Fenton.

The former UCD Sigerson Cup winner came on as a substitute in the win over Tyrone and if he’s fit to start the final he most definitely should.

Midfield is not the only place where an intriguing aerial contest is expected. If the league encounter is anything to go by, Dublin’s full back line will be well tested too.

In that match eight long balls made it in to the Kingdom’s inside line – Kerry won seven of them and scored 1-4 off those. For only two of the balls kicked in did the forward contesting actually win the ball themselves. Over the years this Dublin defence has expertly bunched out aerial threats such as Aidan O’Shea and Kieran Donaghy - but in Tralee the Kerry forwards gambled. They raced in under the breaks and got their rewards.

To give their forwards the same chance again though, and stop the Dubs from opening up at the other end, winning the midfield battle will be decisive. David Moran will have to get on top of a highly motivated and in-form Michael Dara Macauley, but most importantly of all, Brian Fenton will have to be effectively shackled. For the first time ever in a big championship match.

In the past the likes of Moran and Kildare’s Kevin Feely have matched him, but he’s never been nullified. The Dublin machine has many weapons, but Fenton is the engine. Stop him on the big day, and, well nobody knows.

Women’s Rugby World Cup to be expanded to 16 teams from 2025 12:03
Joe Canning discharged from hospital on Sunday night 11:45
Defence dominated Nations Cup has failed to lift spirits 11:09
The Offload: Shane Horgan pulls no punches as the podcast wars rage on 10:00
All in the Game: Tottenham’s Dele Alli proves popular in Vermont 10:00
Crossword Get access to over 6,000 interactive crosswords