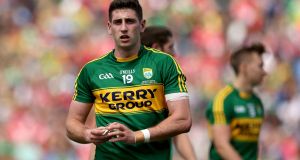 Paul Geaney: one of seven Kerry players to have started every championship game for the Kingdom this year. Photograph: Ryan Byrne/Inpho

Completing the summer set
Seven Kerry players are seeking to complete a championship set in this weekend’s All-Ireland final after starting every championship game to date this year. All of Shane Ryan, Tadhg Morley, Jason Foley, Tom O’Sullivan, Seán O’Shea, Stephen O’Brien and Paul Geaney are expected to line up behind the band in Croke Park, before starting their seventh consecutive championship game in the green and gold jersey.

Perhaps surprisingly, four of the seven aforementioned players are defensive players – Ryan, Morley, Foley and O’Sullivan – despite the general consensus which leads us to believe the Kingdom’s back-line is an area to be exploited against the Munster champions.

Meanwhile, no Dublin player has started every championship game this year though that probably points more to the depth of talent at Jim Gavin’s disposal than any degree of indecision on his part. The luxury of winning four All-Ireland titles on the bounce, and five altogether, means few inevitably question your decisions. Fair enough, you’d have to say.

What they said:
“No defeat as a manager ever hit me like 1955. That was the first time there. It was Kerry. I had great hopes and so on and so on. That formed a large part of what I became as a person.” – In an interview on these pages in 2004, Dublin legend Kevin Heffernan spoke about how the Dublin-Kerry rivalry shaped his life.

Cullen’s cake
As the Dublin/Kerry rivalry has arguably more history than any other in football, memorable clips aren’t exactly in short supply. One clip in particular however, from the 1978 final, pops up more often than any other in public discourse: Mikey Sheehy’s famous chipped goal at the Canal End with Dublin goalkeeper Paddy Cullen caught in no man’s land. It prompted Con Houlihan to pen his immortal line:

“Paddy dashed back towards his goal like a woman who smells a cake burning.”

The drubbing Dublin received at the hands of their fiercest rivals may have been a sickening blow at the time, but it’s heartening to see both Sheehy and Cullen getting on reasonably well all these decades later. As recently as 2017, the pair met to recreate the incident as part of an event celebrating Austin Stacks GAA club’s centenary year.

“Me cake,” shouted the apron-clad Cullen as he dashed to deny Sheehy this time around.

Very superstitious, writings on the wall
As evolutionary as sport has become, pre-match rituals and superstitions remain constants for modern-day athletes. Before Dublin and Kerry players go to battle this weekend, Jack McCaffrey is likely to engage in a routine game of keepie-uppies with Cormac Costello, as he revealed to Colm Parkinson on the GAA Hour last year. Similarly, Kevin McManamon previously told Today FM that he always books a gig the night before a big game.

Paul Geaney, too, partakes in the – oddly enough – common superstition of putting his left sock and boot on first.

However, it’s unlikely Jim Gavin or Peter Keane will loosen the reins enough for any of their players to prepare like Jack O’Shea in his heyday. Writing a column for the Sporting Chronicle earlier this week, the former Kerry star revealed playing 18 holes on the morning of every big game became a ritual, before then driving to Croke Park behind the team bus.

Nothing like spoiling a good walk before lording the Drumcondra skies.

Through the archives:
“It can be fairly said that Kerry and Dublin have been the life-support machine of Gaelic football for a decade, earning the big money for the GAA and showing what Gaelic football at its best can be, as a game and a spectacle.” – In his 1984 memoir, Over the Bar, Breandán Ó hEithir sums up the impact the Dublin-Kerry rivalry has had on the game.

By the numbers:
30 – This weekend’s All-Ireland final will be the 30th championship meeting between Dublin and Kerry. Furthermore, the sides are meeting in the final for the 15th time.

Sing up
The band that penned the infamous five-in-a-row song in 1982 gave some notable advice to Dublin songwriters in this week’s Kerryman.

“I’d say drive on,” advised Declan Lynch, a member of the band Galleon. “If it produces the same effect in 2019 for Dublin that it did for Kerry in 1982, then that would be grand out for me.”

Lynch’s song was allegedly played by Eugene McGee in the Offaly dressing room in 1982, perhaps in the hope that one particular line might strike a nerve: “It’s hard to believe we’ve won the five-in-a-row”.

Thirty-seven years on and Dublin band The Rising Sons have penned a ballad that is sure to needle supporters from outside their county with similarly antagonising lyrics:

“They say they want to try and split Dublin in two;

But you’ll never beat the Dubs no matter what you do.”

Will it make Peter Keane’s playlist this weekend? One former Offaly manager would have certainly approved.