Donegal turn up the heat to leave Fermanagh far behind 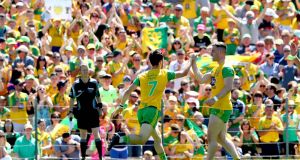 Before it ended Rory Gallagher was already walking down the sideline to shake hands with Declan Bonner, the Fermanagh manager gently accepting how Donegal had just torn his team apart. Bonner duly averted his eyes from the final minutes of play, possibly giddy at the prospect of it all.

For Gallagher, deep down inside it must have felt like some sort of Frankenstein moment, the monster he helped create turning on his hopes and dreams. Before taking over Fermanagh this season, Gallagher spent the previous six with Donegal, three as manager, after three as assistant to Jim McGuinness, spending by his estimate over 800 training sessions with the county. A cruel and unusual twist that was always going to be written, one way or the other.

Not that Bonner was any less stirred by those final moments – the Donegal manager last on the sideline of an Ulster senior football final in 1998, when his team lost late on to Derry. A rare and unusual twist that might not be fully written just yet.

The double-score margin of victory was telling in many ways, Donegal on top and in control long before the finish, although most of the Fermanagh supporters among the full house of 28,780 stayed until the end, including DUP leader Arlene Foster, a native of Fermanagh.

Partly because Fermanagh had came to Clones knocking on the door of history, one of the last two counties in the country yet to win a provincial title, having lost all five previous finals, going back to the first in 1914. Donegal kept that door firmly shut – winning their ninth Ulster title in all and first since 2014, having lost two since.

Bonner also takes some considerable credit as only the third Donegal manager to guide them to that title, after Brian McEniff, and then Jim McGuinness. Six years ago, on this same pitch, Donegal finished in similar style, beaten Down manager James McCartan coming over the shake the hand of McGuinness before time was up, before admiring the masterpiece Donegal had just created.

The 2-18 Donegal racked up here – in sweltering heat too – brings their Ulster championship tally to 8-76 – they could have had a couple more goals in the final, the style and execution of their play – with 13 different scorers – as good as anything seen since that All-Ireland winning summer of 2012.

Fermanagh tried hard and in vain to stop them, but their long kick-outs were soon smothered by Donegal, and when they went ultra-defensive they were still being torn apart. Fermanagh finished with 14 men, losing Ryan Jones to a second yellow card on 54 minutes, but by then Donegal buoyed up and already looking forward to the Super 8s, their only worry on the day being the sight of Paddy McBrearty coming off with a knee injury early in the second half.

“Aye, the Super 8s, and winning the Ulster title is great, we don’t win them that often,” said Bonner. “I think that’s nine in total, and we’ve lost a lot more. And in fairness to the lads, I thought the performance they put on there was top class, just absolutely delighted for anyone involved, because no one really knows the effort and commitment that goes on between players and managers. It’s terrific for all those people involved today. It’s 24/7, and they all went about their business.

“We knew it was going to be difficult in terms of the way Fermanagh were going to set up, but we also knew we had the players and that positivity within the group that was going to cause Fermanagh a lot of problems. At this level a lot is to do with trust, you trust these guys to go out and do a job, and on the big stage, and they were absolutely terrific.”

After a nervy, tentative start, enough positional switches to confuse Pythagoras, Donegal started to move in for the kill on 15 minutes: after two sweet fist passes between McBrearty and Ryan McHugh down the left flank, Eoghan Ban Gallagher, their beastly roaming corner back, was on hand to palm the ball into the net. Gallagher finished with 1-1, joint top scorer on the day.

Michael Murphy, the Donegal captain looking fitter with every game, hit his first free and Donegal were up 1-4 to 0-1, suddenly cruising, Fermanagh’s hopes of success now flying like Icarus. Murphy, despite the best efforts of Che Cullen, was warming into the game and his influence telling around midfield. All Fermanagh had at that stage were two frees from Seán Quigley; Séamus Quigley, replaced before the start, came in and hit 0-3, one free, too little, too late.

On the half hour, Eoin Donnelly hit Fermanagh’s first from play, a rare clean run through the middle. The optimism was short and quickly soured when Donegal won the resulting kick-out, Paul Brennan passing off to Ryan McHugh, who cut straight to the goal chase and produced a smashing finish. Michael Langan was covering immense ground too, also kicking a point.

Donegal went into the break 2-7 to 0-5 in front, the only worry at stage was McBrearty injuring the inside of his left knee when kicking his point, later replaced 10 minutes into the second half by Daire O Baoill.

That eight-point margin was extended three minutes into the second half, with another point from Paul Brennan, Donegal were in complete control. After 10 minutes, Paddy McGrath had a goal disallowed for being in the square, Jamie Brennan having a chance too, but it hardly mattered. Anthony Thompson was one of their men to come off the bench as Bonner’s panel looks increasingly deep and menacing.

“The hope was to be nip and tuck at half-time or maybe slightly ahead,” said Gallagher. “That wasn’t the case and it was going to be difficult for us. We tried to really, really go at it and we changed our tactics in the kick-outs. We had some success but in order to do that we needed a score at the start of the second half. We put in a few high balls and nothing came.”