Leitrim run out handy winners as Louth finish with 12 men 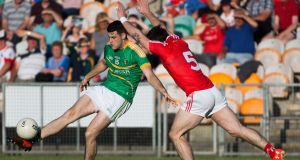 Leitrim put on a sparkling second-half performance to secure just their third ever All-Ireland Qualifier win when they outgunned a Louth side that ended with 12 players on the field in Carrick-on-Shannon.

Louth were reduced to 14 men when James Craven was red carded for an apparent 28th-minute head butt on Leitrim’s Damien Moran, while Emmet Carolan and Bevan Duffy each received a black card in the second half after all their subs had been used.

The Wee County had enjoyed a dream start when William Woods fired to the Leitrim net after a poor third minute kick-out by goalkeeper Diarmuid McKiernan and they went further ahead when Ciarán Downey fisted over a minute later.

Leitrim opened their account with a Jack Heslin point after five minutes but by the ninth minute, Louth led by 1-4 to 0-2 on nine minutes after Woods put over two frees and Declan Byrne shot over from play.

Two Emlyn Mulligan points and one from Darragh Rooney before the break brought Leitrim right back into contention and they went in trailing Louth by 1-7 to 0-9 margin at half-time.

Using the extra man to great effect after the restart, Leitrim upped their game several notches after getting on level terms 22 seconds into the second half from a Donal Wrynn point.

Hitting five more unanswered points in the next 11 minutes, Leitrim built up a 0-15 to 1-7 lead. Mulligan put over two frees while Ryan O’Rourke, Darragh Rooney and Moran chipped in with a point each.

After that Louth’s challenge completely faltered and Leitrim ran out easy winners.