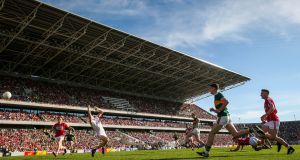 This Munster Final was a bit of a game for a while and then it was nothing for an age. Kerry got nailed for two early goals and still ended up running out with their biggest win over Cork since 1938. They head on to the Super 8s in fine fettle, full of running and scoring and, notably, excellent tackling. But Cork, dear Lord, Cork.

Ronan McCarthy becomes the fourth Cork manager to lose to Eamonn Fitzmaurice’s Kerry in just six years. The final margin was 17 points and it would have passed 20 handily enough if Kerry had kept their foot to the floor. Cork put in a spirited opening 10 minutes but all it did was delay the point at which Kerry disappeared across the horizon.

The thing about snatching a couple of early goals against Kerry is that needs to be the start of the conversation rather than your whole argument. When Cork ran in a pair of identikit three-pointers in the opening 10 minutes, the game was afoot. When they only added a single point for the rest of the first half, the game was gone.

Those goals from Jamie O’Sullivan and Mark Collins amounted to false advertising. They sold the 27,764 crowd in Páirc Uí Chaoimh a contest when all that was on offer was the now predictable cakewalk. Kerry were slicker, faster, fitter and more accurate. There was altogether too much snap to their play for a leaden-footed Cork to handle.

You wouldn’t even call the Cork goals speedbumps. Speedbumps are supposed to slow you down. After O’Sullivan’s goal in the second minute, palmed home after terrific work by Ruairí Deane on the edge of the square, Cork could only hold the lead for another three minutes. First David Clifford stuck his first point of the night and then Stephen O’Brien skated through the middle of the Cork defence and roofed a finish after a 45-metre run. Five minutes in and the score stood at Kerry 1-1 Cork 1-0.

Kerry were rampant under what still felt like a midday sun. Seán O’Shea thundered through to clank the crossbar with a shot, James O’Donoghue’s follow up was blocked out for a 45. Paul Geaney rifled a point with the outside of his boot after Clifford picked him out with a quick sideline ball and Kerry were two ahead and unlucky that it wasn’t more.

The second Cork goal came a minute later, a carbon copy of the first with Deane scudding through the Kerry rear-guard and lofting a cross for Collins to tap to the net. And when Luke Connolly zinged an audacious score with the outside of his left boot on the run a minute later, it put them 2-1 to ahead 1-2.

Connolly even turned and pointed his finger to the crowd, an act of bravado that felt a bit previous even as it happened. And so it proved. Connolly’s point, gorgeous and all as it was, turned out to be Cork’s last score for 35 minutes. They didn’t score again from play until Peter Kelleher looped over a point with five minutes of the game to go.

Kerry just shrugged their shoulders and ate them whole. Their movement was a world apart from anything Cork could come up with. Clifford tortured Sam Ryan, turning him inside and out with and without the ball. Ryan’s black card for pulling him down on 17 minutes was possibly a little on the harsh side but in truth, referee Ciarán Branagan was doing him a favour.

By that stage, Kerry were 1-5 to 2-1 ahead. They were zig-zagging the ball over and back in their attack, with Geaney, Clifford and O’Donoghue all on plenty of ball. Geaney fisted a smart point on 21 minutes, Paul Murphy zipped up to join in the fun soon after. O’Shea iced a free, Clifford tacked on another. Drip, drip, drip.

Kerry went in 1-11 to 2-1 ahead at the break and if Cork’s notions weren’t beaten out of them by that stage, Geaney’s first goal a minute after the break did the trick. Clifford should have banged in one of his own a minute later but it was deflected out for a 45. By then, it was training session stuff.

All you could do for the rest of the night was keep score and wonder at where Kerry can go. And more to the point, where Cork have gone.