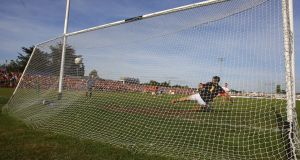 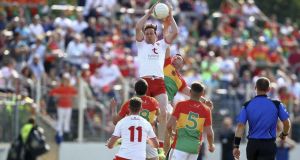 Tyrone’s footballers made their first visit to Carlow a productive one as Mickey Harte’s men secured a 10- point margin in this All-Ireland Round 2 Qualifier at Netwatch Cullen Park on Saturday.

Before an attendance of 6,353, Carlow matched their Ulster rivals for over 20 minutes of the opening half and a well-taken goal on 17 minutes from full forward Darragh O’Brien, son of team manager Turlough, gave the home county a 1-2 to 0-3 lead. For the final stages of the half Colm Kavanagh and Declan McClure were dominant in midfield, allowing the accurate Red Hand forwards to pick off a string of points, while Carlow were to go 26 minutes without a score.

Both sides set up defensively but Tyrone had players who could break at pace from defence and set up scores, while the Carlow attack was hugely dependant on Paul Broderick for scores.

After Tyrone led 0-8 to 1-2 at half-time, they turned the screw on Carlow after the change of ends. Connor McAliskey and Paul Broderick traded pointed frees and further white flags from McAliskey, Peter Harte and Mattie Donnelly saw Harte’s men storm 0-12 to 1-3 ahead on 45 minutes. The game was up for Carlow two minutes later when the outstanding Harte drove through the centre of the Carlow defence to set up Niall Sludden for a well-worked goal.

Tyrone class manifested itself for the remainder of the game with further goals from a Harte penalty on 66 minutes and another from Richard Donnelly.

Carlow, who had beaten Louth and Kildare before losing to neighbours Laois in the Leinster semi-final, gave it their best shot but, after a brave showing the gulf in class between the counties told in the end.