Despite scoring 2-11 in the second half, Cavan never seriously worried Donegal 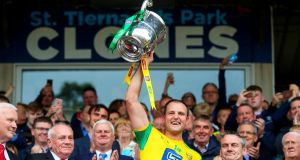 In the 57th minute of this game, Jamie Brennan took hold of a ball that Michael Murphy had punted forward towards Patrick McBrearty. The Bundoran man was in full flight. For the first time all afternoon, a rumble of anticipation had begun to rattle through Clones.

Cavan had, for the first time, got some traction in this Ulster final, knocking over three points in a row. Since two o’clock, Donegal had kept them at bay with the precise point taking and their slick running game. But now there was six points between the teams and enough time to imagine Cavan, the outsiders, storming back into the game and who knows, even history.

Brennan is a flier and he tore a blurred line in front of the Gerry Arthurs stand. There was no Donegal man up with him but it didn’t matter. Brennan turned sharply inside, cutting through a panicked Cavan defence and snuck a shot through the blue shirts. Suddenly it was 1-8 to 0-12 on the scoreboard and a sense of inevitability settled over the old railway town again. Donegal would claim their fifth Ulster title of this decade with little undue fuss.

For the huge Cavan crowd who had poured over the county line for this final, the moment was illustrative of a day of much promise which simply couldn’t deliver.

Their team started tentatively and finished emphatically, with a 75th-minute goal from Conor Madden, bringing Cavan’s total to a highly respectable 2-16. It meant that this was the highest scoring Ulster final ever.

Had Mickey Graham been offered that total at midday, he would certainly have happily taken it. But despite hitting 2-11 in the second half, Cavan never seriously worried Donegal.

The defending champions eased into control of the game in the first 15 minutes. Graham flung a left-field tactical change just before the throw-in, replacing his full-forward line and setting up with a more orthodox defensive structure and inviting Donegal to try and play their way through it.

As it happened, they were up for that. On a day when Michael Murphy scored just one point from play – and didn’t attempt to land any more, Donegal had scoring options everywhere. Twelve different players scored. Brennan carried the role of tormentor in chief from the Tyrone game into this final but Ciarán Thompson and Hugh McFadden also landed excellent scores. Patrick McBrearty exploded into life in the second half with 0-4 from play.

At the other end of the field, Shaun Patton continues to use restarts as his own personal Cape Canaveral, launching a series of spectacular long kick outs through the cool afternoon.

Paddy McGrath was tasked with the vital task of shadowing Dara McVeety and gave one of his best hours in a Donegal shirt. The Crosserlough man registered 0-3 and in the second half but looked to be through on goal in the 70th minute but McGrath made a brilliant recovering block to snuff that chance out.

Declan Bonner gave Gaoth Dobhair’s Odhrán McFadden Ferry his first start at senior level just before throw-in to cancel out the low-gravity, high-speed threat of Martin Reilly and the crew-cut defender is another in the mould of attacking Donegal defenders. The variety of ball carriers and the constant switching of play had Cavan addled s and three times in the second half, Donegal flicked over points when goal chances were on.

At half-time, Cavan were in a bleak place, trailing 0-13 to 0-5 after Brennan converted a hard-won ball and pass from McBrearty. Given the lionhearted efforts of Cavan to make it this far, it had been a desperately muted opening 35 minutes. And they had reason to fear the thought of a free-running Donegal side in the second half. It was important they prevented that.

Killian Clarke stuck grimly to the thankless task of neutralising Murphy. But the Glenswilly man was happy enough to put in a day on the building site, getting through a mountain of unfashionable covering work.

Gearoid McKiernan kind of hauled his county back into it on the scoreboard and the turbo-thrust generated by Cian Mackey and Stephen Murray began to trouble Donegal with about 25 minutes remaining.

Madden, one of the frontline originally tagged to start, came in and hit 1-1 and the team could not have asked more from the Cavan support, who were quids in for the sign of any kind of fightback.

With Neil McGee, trading with a quickly-acquired yellow card, leaving the field in the last quarter, Cavan began to probe the Donegal backline with more direct ball. Their second goal emanated from a rare misplaced kick out by Patton and Conor Moynagh, the recipient, delivered a smart long ball to Stephen Murray to leave Cavan just four points adrift in the 73rd minute.

Had that goal arrived with 10 minutes to go, then maybe Donegal would have become nervous. As it was, Brennan won a free at the other end and Murphy tapped over to complete a remarkable decade of success for the Glenswilly man and his county in Clones.

3 Johnny Sexton circles the wagons and insists Ireland are improving