Kerry minors show character to make it seven in a row

Late points for Kerry are enough to see off dogged Cork 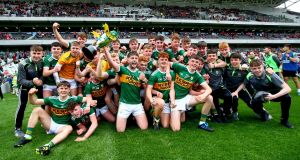 Kerry minor manager James Costello praised his team’s character as they made it seven Munster minor football titles in a row on Saturday evening.

Like the senior game that followed, Kerry were favourites going in but had to produce a good response after Cork drew level, with Emmet O’Shea, Jack O’Connor and Darragh Lynch getting late points for the Kingdom.

“I think it showed a lot of resolve and I think we needed it,” Costello said.

“The wind was a lot stronger than people realised. We had to work hard and we scraped hard. We didn’t play well in the first half, Cork opened us. But we scraped hard and so to get our noses in front was important.”

Kerry had won by 3-19 to 1-9 in the round-robin stage and started well but Kelan Scannell’s goal put Cork 1-1 to 0-3 ahead and they had a second green flag thanks to an own goal.

They led by four point at one stage but Kerry were 2-8 to 2-6 in front by half-time as Colin Crowley and Dylan Geaney struck for goals before the break.

A third goal, from Kevin Goulding, extended the lead on the resumption but Cork stayed in touch, with captain Conor Corbett impressive and he had the equaliser to cap a run of four straight points in the closing stages. Kerry had the final say, though.