Offaly into third round of qualifiers for first time since 2010 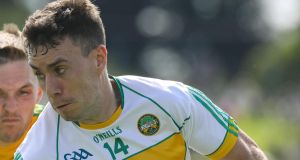 Offaly’s season of improvement and progress continued in O’Connor Park on Sunday as they reached the third round of the qualifiers for the first time since 2010 after an easy win over Sligo.

Offaly produced a mixed bag at times but an 11 point win could not be quibbled with and overall, it was a very satisfactory day at the office.

It provided clear evidence of the improvement that has been made with John Maughan at the helm and Offaly were delighted to get a third game in the qualifiers with the possibility of more.

They hit the ground running here and laid a powerful foundation in the first quarter. With the wind at their back, goals from Niall McNamee and Shane Horan saw Offaly 2-3 to 0-2 to the good after 13 minutes. However, they had their worst spell in the second quarter, losing their intensity and drive.

It allowed Sligo to creep back into it and Paddy Dunican had to make an excellent 20th minute save from Paddy O’Connor to keep the winners in the driving seat. At half-time, Offaly led by 2-8 to 0-9 and the game was far from over.

In the second half however, Offaly wasted no time in putting their opponents to bed. Niall McNamee punched a goal four minutes after the restart and three more points on the trot put Offaly 3-11 to 0-9 ahead, with Sligo getting their first second half point from sub Barry Gorman in the 53rd minute.

It was all fairly routine from here on as Sligo looked like a beaten team. They did get four points on the trot to reduce the deficit to 3-13 to 0-14 with five minutes left but Offaly finished well, kicking three of the last four points while Barry Gorman was red carded in injury time.