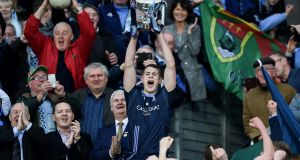 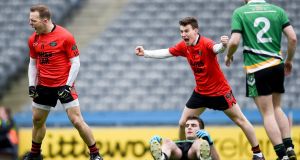 To Croke Park for the junior and intermediate All-Ireland finals, a chance to see the GAA without its make-up on. The last surviving big day out that can still feel like it hasn’t had its edges planed or its droopy bits nipped and tucked. A raggedy-arsed outpost in an ocean of slickness.

Four teams – north, south, east and west. Two games decided by the kick of a ball. Red cards, yellow cards, black cards, some given, some not. Stretchers and stoppages, halves that ran 10 and 12 minutes over. Referees booed, as ever.

Scenes and snapshots. Glenbeigh-Glencar of Kerry taking the roof off their dressing room under the Cusack Stand screaming odes to Kolo and Yaya Touré. Rock St Patrick’s of Tyrone down to 12 men and sending 38-year-old goalkeeper Seamus Donaghy forward for one last attack.

Niall Ronan of St Colmcille’s in Meath, formerly of Munster and Ireland in rugby, disappearing from the game for 20 minutes only to reappear in injury-time with a head-wrapping bandage that would put Willie Joe Padden to shame. Lee Keegan’s father bear-hugging Westport and Mayo’s footballer of the year across the advertising hoarding, their embrace only separated by a lady in a Croke Park steward’s bib looking for a selfie with his son.

This was four strictly local concerns criss-crossing purely by happenstance. The odds of them ever sharing the same stage again at the same time must amount to moonshot numbers. Ask someone in Westport this morning who won the first game and they’ll look you with pity and probably order you a pint. This wasn’t that kind of event.

For what it’s worth, Glenbeigh-Glencar did, a 1-14 to 1-11 victory over the Tyrone champions. Darran O’Sullivan scored a goal after two minutes and fisted the insurance point six minutes into injury time. Sandwiched in between was a game of compelling to-and-fro that could just as easily have tilted the way of the northern side.

This is junior football and every sort of footballer gets his go. Glenbeigh-Glencar had O’Sullivan, the four-time All-Ireland winner. They had Fergal Griffin, who played on the same Kerry minor team as the Gooch and Declan O’Sullivan and has spent the 16 years since showing that a good solid club midfielder is something to be. And when they really needed carrying, they had Gavan O’Grady, a Kerry minor, under-21 and junior player in his time but having his day of days here when it mattered most.

Rock had Ciaran Gourley, 37 now and three All-Irelands in the rearview mirror. They had Aidan Girvan, who has been hopping over and back from Australia as Rock’s campaign endured longer than it was supposed to. Above all, they had Conor McCreesh, the full-forward carrying a bit of a gut and a bit of an arse and pure poetry in his boots. It was very nearly enough.

The Kerry side led by four after 10 minutes but Rock had far more quality to their shooting and went in level at the break. Both sides were down to 14 by now and the Tyrone champions looked like smart money.

But with O’Sullivan carrying a limp, O’Grady took it upon himself to go and win the day for Glenbeigh-Glencar. He scored three from play, three more from frees, played men in for two more and set-up O’Sullivan for his goal. Can’t ask for any more than that.

Afterwards, Aidan O’Shea, son of Jacko and manager of Glenbeigh-Glencar, addressed a broken Rock dressing room. “Lads, ye fought like hell out there. We watched all your videos and we knew that the one thing ye wouldn’t do was give up. Ye’ve done yourself proud. Ye’ll go and have a drink together tonight and all I’d say lads is to stay tight with each other because ye’ll go a long way together.”

The intermediate game went Westport’s way but only in the end and only just. In the sixth minute of injury-time, St Colmcille’s corner-forward James Conlon kicked the last bit of energy out of his leg and his high shot into the Hill end dropped onto the crossbar and hopped clear. Game over, Westport 2-12 St Colmcille’s 3-8.

Again, all human GAA life was here. Five of the Westport team are teenagers. All five are Mayo minors. And only for mid-term break, all five would be due in school at Rice College this morning. Three of them, Oisin McLaughlin, Paul Lambert and the excellent Colm Moran, played in the full-forward line and tore St Colmcille’s to shreds.

“Kids with big balls, that’s what they are,” said Lee Keegan, Westport’s oldest starter at the grand old age of 27. “It could be very easy for young lads to come to Croke Park and, not freeze or anything, but try to do something different. They don’t know how to lose.”

Keegan was arm in arm with his brother Phil afterwards. It wouldn’t have taken much for life to work out differently for either of them. Phil’s first love is soccer, Lee’s earliest promise was in rugby. Their dad is a Cheltenham man who never heard of the GAA until he met their mother working in a pub under Wembley Stadium in the 1980s. Yet there they all were, kings of Croke Park for a day.

In so many ways, the best day it has going for it.