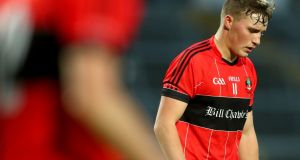 Bourke top-scored for the winners with two goals and three points - two from frees - while both Shane O’Connor and substitute Roy Gleeson landed a goal each. Ballylanders grabbed just three points from play in a one-sided Limerick SFC final.

A repeat of the 2018 final which Adare won by four points, they started strongly again with Ronan Connolly coming close early on, but his effort was comfortably saved by Declan O’Connor. As was the case in their semi-final six-point victory over Galbally, the opening score of the game came from Bourke to give the favourites an early boost. His unstoppable shot hit the top corner after a superb Mikey Lyons hand-pass split the Ballylanders defence.

O’Connor denied Adare their second goal as an excellent pass by Bourke found Davy Lyons inside the small square, but his shot on goal was pushed on to the crossbar. O’Connor was alert again in dealing with his third one-on-one, denying Shane O’Connor although Mark Connolly slotted over the rebound from the ground. Shane O’Connor however did make amends shortly afterwards, scoring Adare’s second goal, from the penalty spot, as Ballylanders struggled with their shooting at the other end. They recorded six wides in the opening half.

Adare extended their comfortable advantage in the second half and after Robbie Bourke and James Barry Murphy traded points the West Limerick side held a 2-6 to 0-4 lead at the water break mid-way through the second half.

Adare drove on and two further late goals - a second from Bourke and the fourth of the game via substitute Roy Gleeson - ensured the men in black and red claimed the Limerick SFC for the third time.