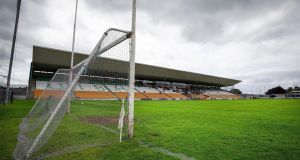 They almost lost it right at the death but there was no disputing the merit of Rhode’s win when they claimed their 30th Offaly Senior Football Championship final in Bord na Mona O’Connor Park.

They were the better side by a distance on a quite brutal day for football but Rhode came within a hair’s breadth of a devastating defeat when a Tullamore goal over six minutes into injury time was ruled out – a Tullamore player got a boot to a breaking ball in a packed goalmouth but referee Marius Stones blew for a foul and a relieved Rhode held on.

Just a couple of minutes earlier, they had been coasting to victory and their lead of 1-9 to 0-6 as it went into injury time was a very accurate reflection of their superiority. A point from Peter Fox and a goal from Aaron Leavy cut the deficit to two points and suddenly Rhode were hanging on.

Tullamore almost snatched the most unlikely of wins when a stray boot connected to that ball but it would have been larceny on a grand scale.

Rhode had got completely on top in the second half with a strong wind on their backs. In a tight first half that did little to set the pulse racing, Tullamore led by 0-5 to 0-3 at half time but the odds very much favoured Rhode at this stage.

With the McNamee brothers, Alan and Niall, outstanding, they dominated the second half and a 49th minute goal from Aaron Kellaghan put them 1-7 to 0-5 ahead.