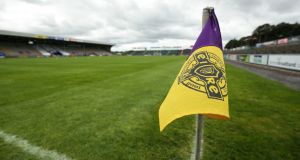 In what was an epic struggle in dreadful conditions, Starlights struck with three late points through flashes of brilliance to end the reign of champions Castletown in the Wexford Senior Football Championship final at Chadwicks Wexford Park.

Castletown came as favourites to make it back-to-back titles and they looked to have snatched victory when Ben Brosnan pointed them in front as the game moved into additional time. However, Starlights made the most of their ability to win outfield possession in the closing two minutes of additional time as they responded with three unanswered points through Alan Tobin from play and a free and a superb Ricky Fox effort which saw them regain the title last held in 2017.

In the warm-up to the game both sides must have been concerned with the conditions of strong wind and rain but it was Castletown who settled with the elements in their favour, leading 0-3 to 0-0 after nine minutes through points from Jonathan Bealin and two from Brosnan.

Starlights had their opening score when Fox pointed free at the end of the opening quarter, with Darragh Pepper adding a second, but Castletown received a real boost with a Brosnan goal from a penalty in additional time to leave them leading 1-4 to 0-3 at the interval.

Both sides were battling for scores on the resumption with the sides level, 1-5 to 0-8, at the three-quarter stage, but with Brosnan kicking some neat points to counter a brilliant Dylan McVeigh goal on 42 minutes, the game hung in the balance.

Then came that explosive finish as the weather deteriorated with Tobin the real kingpin as he stuck over two pressure points to edge his side in front before Fox added the clinching effort in the closing seconds.