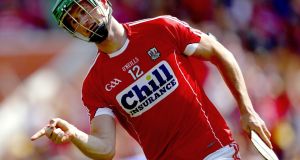 This has been Séamus Harnedy’s best season so far for the Cork hurlers.

Aged 28 he’s one game away from a third All-Ireland final (after the draw and replay in 2013) after claiming his third Munster title earlier this month, as captain. But this summer he has become the go-to man like never before.

Last season he captained Imokilly to win the Cork County SHC title, and despite his second lowest scoring league campaign yet, he’s been the Rebels’ standout performer so far this summer.

Harnedy has scored 3-14 in Cork’s five championship matches, all from play, he’s by five points the Munster champions’ top scorer (aside from placed balls) with a scoring average of 0-5 per match.

Next best is Patrick Horgan and then Conor Lehane with 1-11 and young Shane Kingston with 1-9. As for Harnedy, this is his best scoring summer ever, with the next best being in his debut campaign for the Cork seniors in 2013.

Since then his scoring average has dropped from just under 0-3 per match, to 0-2 per match, back to 0-3, in 2016 he scored only 0-2 in three matches, and then last summer his average returned to just under 0-2 per appearance.

This year his two biggest contributions to a team in form, have been in his ball winning under Anthony Nash’s long puck-outs, and his goalscoring. In this summer’s championship he’s already scored three goals in five matches, half of the tally he’s amassed in all of his 26 Championship appearances.

His last goal before this year’s Munster opener was in July 2015 (his last goal in league or championship was on April 3rd 2016).

Contrast that with this year wherein he has scored or directly assisted in five of the seven goals John Meyler’s team have bagged in claiming back-to-back Munster titles for the first time since 2006 when they came into the season as All-Ireland champions. Cork have raised one more green flag this summer than in their previous two championship campaigns combined.

And against Limerick in this weekend’s All-Ireland semi-final, the only team to have held them (to a draw) in this year’s inaugural Munster round robin, goals will be decisive. In that drawn match in Páirc Uí Chaoimh, it was Harnedy who popped up with the late equaliser and very nearly the winner.

The Munster final victory however showed him at at his clinical best.

Within 13 involvements he managed a goal and another goal attempt, four points, a hook block, a goal assist and two spectacular catches.

It was those two catches which were arguably the most crucial of the lot (his two late efforts against Limerick also came off the back of winning long puck- outs) as they served to keep Cork alive in an otherwise flat first-half performance.

When Anthony Nash and Cork are under pressure, the Rebels’ number one will raise his arm with the ball clinched in his fist and then aim for Harnedy at the edge of the opposition D. If he wins it there’s almost certainly a score on its way.

And when those long puck-outs come off the game couldn’t look simpler. The problem is however, that Cork’s half forward line are not winning nearly enough of their goalkeeper’s long restarts. And they can’t all go to the captain.

Against Clare in the Munster final, Cork lost 44 per cent of their own puck-outs in the first half. Overall they lost 37 per cent, a figure which they must improve on to beat Limerick.

In that encounter, Nash struck 20 restarts beyond the Clare 45 metre line and Cork won less than half of those.

Inside their own 65 they lost only one.

The winning of the game was their improvement in this department in the second half. They lost only five and won 12 – an increase of 27 per cent – and while Harnedy was their only out ball in the first half (one which they were lucky to depart at the interval trailing by only four points) it was another man who lifted the pressure after the change of ends.

The positional switch of Darragh Fitzgibbon to centre forward with Daniel Kearney seamlessly slotting into the engine room was crucial to the six-point second half turnaround.

Fitzgibbon won three crucial long puck-outs by Nash, which directly led to Cork scoring 1-1. The added option allowed Nash to hit the edge of the D or go short more often, without Clare being able to push up or bunch the D as quickly.

This weekend Cork need a repeat of the second half – not the first. As for Harnedy, more of the same will do just fine.