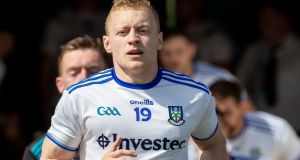 Colin Walshe: 'We are not depending on a different result. It’s in our hands, if we win in Galway we are in an All-Ireland semi-final.' Photograph: Morgan Treacy/Inpho

The draw smarted like a defeat, a numbness that enveloped the Monaghan players as they trudged from the pitch at Clones replaced by a feeling of frustration when the panel reconvened on Tuesday evening to review Sunday’s draw with Kerry.

The outstanding David Clifford’s instinctive finish wasn’t the focal point for regret. Monaghan chose to look within, to their performance for the source of disappointment. Colin Walshe, speaking at the launch of the EirGrid ‘GAA Moment in Time,’ used a word like ‘eerie’ to describe the silence that greeted the final whistle.

Post-mortems for teams that don’t win are rarely comfortable and so it proved. Monaghan reached the threshold of victory without taking that final, important step. There was much to admire in the way they played but to move forward to the next challenge, against Galway in Salthill the weekend after next, they had to collectively address the blemishes.

The Monaghan captain admitted: “We just looked back to where we let ourselves down. Every man gave it his all and we worked all over the field. It became a bit of a shoot-out. We scored 1-17 against Kerry but we felt we left an awful lot of chances behind us, scores on another day we should have taken, or maybe opted for another pass or an extra play just to [work] an easier opportunity. We left a lot of chances behind us. We didn’t punish them enough.

“It was a strange atmosphere after the final whistle. There had been a great atmosphere throughout the game in Clones. It was eerie enough, quiet; there was no sense of celebrating. We were disappointed. It was a ‘sickener’ to lose the goal near the end especially having a lead going into the last 10 minutes.

“We missed chances when we were on top to extend the lead and left them in it; it was a ‘one kick of the ball’ game near the end. Kerry threw everything at us; they knew their championship was on the line.

Review over, lessons learned and hopefully absorbed, Walshe said there was no appetite to wallow in the disappointment.

“We were back training that [Tuesday] night and we kind of drew a line under it. We have three points from four and if you had offered that to us a few weeks ago, or even looking back after Fermanagh beat us, that we would be sitting in this position going into the last game of the Super 8s knowing a win would allow us to top the group and go into an All-Ireland semi-final we’d have taken it.

“If we don’t then we’ll say we won one game out of three and we didn’t do enough to get into a semi-final. Going into the Super 8s we would have felt that it was going to go down to the wire. We drew a line in the sand and said that if we dwell on it, it is not going to benefit us. We will go down there [Salthill] fully focused and try and get the win.”

Walshe found himself the subject of debate over a refereeing interpretation in relation to Rule 1.2 that states “any player who falls or is knocked to the ground while in possession of the ball may fist or palm the ball away on the ground and may score.” The Monaghan captain admitted: “I read about that rule afterwards. I probably wouldn’t have been aware of it.

“I was kicking myself for getting caught in the corner with the ball. That was going through my head. It is just part of the game. At that stage of the game a lot of things go out the window and it was just something that I should have handled better. I probably could have got a bit more pressure on the kick going in. We still have everything to play for.

“There was the same decision against Conor McManus about 10 minutes previously on the edge of the D. He went for a ball on the ground and the same, he touched it away and it was given as a free out. It is one that needs to be touched on and highlighted.

“Maybe in the heat of the game he [the referee] didn’t let it go. As I said it was probably the fact that I was caught in the corner with the ball and got dispossessed, that annoyed me more than the actual decision.”

Of course it’s not the first time this year that Monaghan have been sucker- punched by a late goal.

“Yeah, that day against Fermanagh it was one-on-one in the square nearly against Eoin Donnelly who is 6ft 4in/5in and it was something we shouldn’t have let happen. Whereas the last day there was plenty of bodies around it, it was a ball that was squeezed into the space and it was the only place it was going to go to get a goal. Young Clifford found it, so we just had to deal with that one.”

Slightly bloodied but as yet unbowed in the Super 8s, Monaghan are still within touching distance of where they want to be.