Even Dublin find dead rubber is a hard sell 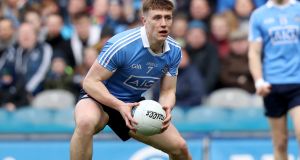 Dublin’s John Small: “There’s great competition all over the pitch and everyone is fighting for their position and fighting for a jersey.” Photograph: Oisin Keniry/Inpho

Beyond offering free sweets and popcorn for everyone in the audience Dublin’s last game in the Super-8s is a hard sell. They’re already into the semi-finals, Roscommon are already gone, and not even the buskers have much reason to be around Croke Park on Sunday week.

Dublin will want to win to top the group and extend their four-year unbeaten run in the championship, going back to the 2014 semi-final loss to Donegal; Roscommon will also want to save some face after two heavy defeats, none of which adds much to the dead rubber of a game that it is.

No harm trying: at a media event in Parnell Park, Dublin’s headline sponsors AIG announced that their jersey logo would be replaced by the children’s charity Aoibheann’s Pink Tie for that Roscommon game, and also rolled out Dublin defender John Small to help sell it.

Given how little is actually at stake, might the GAA have been better off moving the game to Dublin’s smaller home ground at Parnell Park?

Even though the game is essentially a dead rubber?

“No, Roscommon pose a very different threat than Tyrone do, and they are a different animal. Everyone is fighting for a position, everyone wants their opportunity to represent the group and the fact that we have another game is great. We are just totally focused on Roscommon. They play a nice, attacking brand of football and it will be a really tough game in two weeks’ time.”

Moving on. Small was suspended for Dublin’s opening Super-8s game against Donegal, having been red-carded in the Leinster final win for a strike on Evan O’Carroll of Laois. Dublin appealed, unsuccessfully, although Small doesn’t appear too bothered by it, and he was recalled for last Saturday’s win over Tyrone in Omagh.

“I just tried to tackle the ball and it was a bit unfortunate the way it transpired. But the referees are trying to do their best. We appealed it and didn’t get off and that’s just the way it goes.

“It was just the decision taken on the day. I wasn’t going in expecting either way. They just decided that I didn’t [get off] so we just took it on the chin and that was it.”

Walking straight back into Jim Gavin’s team is no feat, and the Dublin manager clearly believed Small was the kind of player needed to deal with Omagh. Did he enjoy the experience of playing outside Croke Park?

“Yeah, it was a great game up there, very tough, very physical, Tyrone are a great side. We didn’t expect anything less, there was only one score in it in the end. Yeah, a very good game. You know, we’re all just delighted to be able to represent Dublin and to go out and to perform to the best of our ability. We don’t really mind where the games are to be honest.

“It’s great that the management have the trust to put me in and trust that I can do my job for the team, and I’m delighted that they did that. It was great to get the opportunity to play. There’s great competition all over the pitch and everyone is fighting for their position and fighting for a jersey.

“Tyrone are a very good team. They came back at us, we didn’t expect anything less, it was a very tough, physical contest. They got back into the game and we held on in the end. We were delighted to get the win.”

The talk of a tighter pitch at Healy Park – and who exactly requested it –didn’t appear to get through to Dublin: “I wasn’t even aware of it,” says Small. “Apparently it was, but I didn’t even notice. We try to win and perform to the best in every game we play, so we will go out and try and do that again against Roscommon.”

Given he started out in schoolboy soccer, playing with St Kevin’s and later Tolka Rovers, Small is also happy to sell another game, and sees no reason why the Liam Miller fund-raising game can’t be played on GAA grounds:

“I haven’t looked too much into it but I think I don’t see any problem why they wouldn’t play the game there in Páirc Uí Chaoimh. I haven’t got a massive opinion on it but I don’t see why they wouldn’t. I’d have no issue with them opening up the gates and playing soccer games at all. You know, it can’t be a bad thing if more people are going to Croke Park or the different stadiums, watching games.”