David Clifford’s wonder goal keeps the Kingdom in the championship, for now 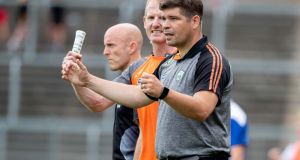 Kerry should be vanquished from this unusual football championship, but in David Clifford we see a comet capable of the unbelievable.

It needed two past footballers of the year to find Tutankhamun. There followed a wonder goal that keeps the Kingdom on life support for another fortnight.

More miracles will be needed to find September.

Replaced by Kieran Donaghy before throw-in, all James O’Donoghue could do deep into injury time was drop the entire show on top of Star.

O’Donoghue glanced up before spinning a high ball towards the square’s edge. Finally, Donaghy freed himself of Vinny Corey’s vice grip. The tip down was kind, the teenager’s finish a mesmeric slice through six Monaghan bodies.

Locals, to man, woman and child, crumbled to their knees.

Five points clear with 10 minutes to play (when Clifford landed possibly the best point Clones has ever witnessed; certainly one to rival the wind-talking Maurice Fitzgerald on another weird Kerry journey to Thurles back in 2001), the mighty Conor McManus kept them four ahead with four to go.

Only the sprinkle of travellers were delighted at the announcement of five additional minutes.

Monaghan had these young Kerry footballers by the throat – literally, in the case of Kieran Duffy on Clifford, as yellow cards were ridiculously shared. They had the physical measure of them.

They outclassed them via McManus, Rory Beggan and Karl O’Connell in all areas of the field. They just needed to hang on and Kerry’s summer would be in ruins and Éamonn Fitzmaurice would be relieved of the bainisteoir bib after an excruciating two week lead-in to a nothing match against Kildare in Killarney.

When the dust settles, Monaghan should realise they can still bury them with any sort of result against Galway in Salthill.

At least they know how to recover from this sort of collapse.

“Look it, we are still in the championship,” said McManus on the field, in between a marathon jersey-signing session. “We have to take positives out of this, that Kerry were coming here as favourites, one of the top teams in the country, and we gave them a run for . . . what, 74 minutes?

“We just forgot about the last minute there.

“It is what it is – we just have to dust ourselves down and go again.

“We’ve a game in two weeks’ time, and a chance to make the All-Ireland semi-final. We are still there.”

Monaghan folk can be heartened by their leader’s positivity, when asked if they need to linger on a repetitive inability to finish teams off.

“What’s the point? People talked about the Fermanagh game earlier in the year, there was a lot said about that, but there is no point in dwelling on it. We just have to move on. You don’t get too down when you lose and don’t get too high when you win.”

Saved by the man-shaped Fossa boy, Fitzmaurice is fully aware that being damned if you do, damned if you don’t is eventually every Kerry manager’s fate, and while he may have to accept a “long winter of retrospection”, this six-hour journey home brought relief.

“Always going back the years since I’ve been involved, we don’t rate the lads’ ability or contributions based on their age. In the past we have been accused of holding on to some of the more experienced lads for too long, but they were always contributing on the big day. It doesn’t matter.

“David Clifford has got big goals for us two weekends in a row and he is barely 19 years of age. Seán O’Shea was only 20 during the week. They are young, they have huge futures, but they are playing well for us at the moment.”

Still, the looming emptiness must have been unbearable. He was a statue on the sideline, but underneath the main stand, in a tiny corridor squeezed full of reporters denying Kerry subs a shower after being flogged on the pitch for their troubles (until Anthony Maher’s imposing frame paved a path), Fitzmaurice quietly smiled and joked about lost frees.

“Delighted that we are still in the championship. We are going for our home game next with it all still to play for. I know we need results to go our way in other places but all we can do is control our own thing and see where that takes us.”

Outside an old women draped in green and gold pulls Clifford down for a hug.

“The ball fell to the right man and he stuck it.”