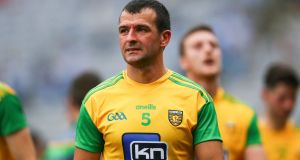 Donegal’s Frank McGlynn: should be fit to face Tyrone in Ballybofey in a vital winners-take-all clash. Photograph: James Crombie/Inpho

With little left to lose or to gain Roscommon manager Kevin McStay has accepted a 12-week suspension following a number of sideline incidents during last Saturday’s Super 8s defeat to Donegal at Dr Hyde Park.

It means McStay must watch Roscommon’s final game against Dublin in Croke Park on Sunday week from the stands. Roscommon are playing purely for pride while Dublin will look to top the Super 8s group and extend their now four-year unbeaten run in the championship.

McStay first remonstrated against the failure to award a first-half free, putting his hands on linesman Niall Cullen. As the sides walked off the field at half-time, McStay also threw the match ball at the linesman’s head and made a direct hit. He did apologise to match referee Ciaran Brannigan at half-time and also self exiled himself in the stands for the second half.

However the GAA’s Central Competitions Control Committee (CCCC) were always going to sanction him: Dublin footballer Diarmuid Connolly received a 12-week suspension in June 2017 after making contact with linesman Ciarán Brannigan. Clare’s Gordon Kelly got the same length of ban after the CCCC deemed he squirted water at an umpire.

“There were two dreadful calls at the end of the first half,” said McStay after the result ended Roscommon’s chances of reaching an All-Ireland semi-final. “They resulted in a score for Donegal and a tap over free for us that we didn’t get. We should have got both calls in our favour. There is no question about that.

“While I accept totally that the referee [Brannigan] might have been blind-side or didn’t see the play, his near side official, Niall Cullen, did see it. There is no question. I was right beside him. Well, not right beside him but I was quite close to him. He couldn’t have missed it. It was the most obvious free of the half and we don’t get that and he [Cullen] won’t inform him [Brannigan]. I don’t understand that sort of non co-operation between officials.

Television pictures showed McStay laying a hand on Cullen and pushing him. McStay wanted Donegal captain Michael Murphy to be penalised for handing-off a Roscommon player before kicking a point and was even more aggrieved when a subsequent decision didn’t go his team’s way.

“Michael Murphy pushes one of our lads on the solo and kicks it over. Fair play, he’s a big strong man – I’m not giving off to him now. I have huge admiration for him, but it should have been a free out. And then the one before half-time; I take it ye knew that was a free? Everyone in the stadium knew that was a free.”

After placing a hand on the official another camera angle picked up McStay throwing a ball that hit Cullen on the head. Roscommon’s 0-20 to 0-13 defeat ended their slim hopes of reaching the All-Ireland semi-finals, after their 4-24 to 2-12 hammering by Tyrone at Croke Park a week earlier, which means the Dublin game is a dead rubber – the only remaining game in the Super-8s that doesn’t carry some weight.

Galway will want to beat Monaghan in Pearse Stadium on Saturday week to stay atop their group, and avoid Dublin, the likely winners of Group Two. Assuming Dublin and Galway both win, Galway will face either Tyrone or Donegal, which ever side finishes runners-up in Group Two.

Those sides meet on the Sunday in Ballybofey with victory for either ensuring a runners-up spot. A draw would be enough for Tyrone, who have a far superior scoring difference to Donegal (+15 versus +2) as the head-to-head record, in the event of a draw, would not suffice to separate the teams.

Galway did Kerry a favour by beating Kildare on Sunday, ending their Super 8 interests in the process. Kerry’s late draw against Monaghan now gives them plenty to play for against Kildare, but they will need to swing a five-point scoring difference currently in Monaghan’s favour, unless Monaghan can either draw with or beat Galway, giving them a first semi-final since 1988.

Tyrone are set to be without full back Ronan McNamee, who sustained a leg injury in the narrow defeat to Dublin in Omagh on Saturday. He was clearly in some distress when leaving he field on 34 minutes. The Tyrone full back line is already missing Cathal McCarron after he suffered a knee injury in the opening Super 8s win over Roscommon.

“He has been a solid rock for us,” said manager Mickey Harte. “The medical people saw that he wasn’t able to go on with the game. It is unfortunate. He was playing very well for us.”

Eoghan Bán Gallagher will also miss Donegal’s last Super 8s clash with Tyrone in Ballybofey on Sunday week. The Donegal defender man underwent a scan on an arm injury in Letterkenny yesterday and has been ruled out. Gallagher had to be withdrawn during Saturday evening’s 0-20 to 0-13 win over Roscommon.

The news is more positive, however, on Frank McGlynn. The Glenfin man had to leave the action on 56 minutes, but Donegal are confident that the 2012 All-Ireland winner will be fit to face Tyrone.

Donegal are already without cruciate victim Patrick McBrearty, who suffered the horror injury in the Ulster final win over Fermanagh

1 James Ryan set for up to 12 weeks on the sidelines
2 All in the Game: Klopp gets the last laugh in quiz show
3 Ken Early: Frank Lampard’s problems start at number one
4 The Offload: Schools rugby talk in the Seanad appears tone deaf
5 Rory McIlroy admits missing the crowds as he looks to end Major drought
Real news has value SUBSCRIBE