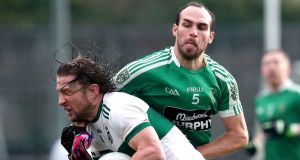 Cahir Healy has made the switch from Laois hurlers to footballers. Photo: Bryan Keane/Inpho

Unlike Division Four, which generally features some counties there to detox for a brief year and a share of lifers, the inmates of Division Three are a constantly changing and unpredictable bunch.

That’s no different this season. As one of the open-ended divisions – along with D2 –Three also sees a lot of churn with the exception of Sligo, a rare case of a county having a residency here, as they embark on an eighth season under the baton of former player Paul Taylor.

Two things stand out: one, apart from the promoted counties, Laois and Carlow, everyone else is on a new manager and there’s no better way of starting your tenure than getting promoted and two, the division is like a sub-office of the Leinster championship.

That eight of the province’s 11 counties aren’t in the top two divisions tells its own tale but there’ll be sufficient ambition to make this a typically competitive campaign. Since the league opted for the four-division hierarchy in 2008, no Division Three county has ended the season pointless and Limerick twice had the misfortune to be relegated, while tied on six points.

Down and Laois are favourites to make it up to Division Two in 2020 and that’s plausible enough although Westmeath, after Jack Cooney leading them to a first O’Byrne Cup in 31 years and with John Heslin expected back, are also likely contenders.

Under John Sugrue, Laois have made impressive strides, bouncing straight back out of Division Four and reaching the Leinster final last year. They are due to be strengthened by Cahir Healy’s switch from the hurlers as soon as he is fit again.

Down’s new manager, Paddy Tally, has been one of the most influential back-room presences in the past two decades and will bring organisation and – if his stint with Kevin Walsh in Galway is anything to go by – a defensive sensibility to one of football’s traditional stylists.

The organisation will be welcome for a panel that has seen a fair turnover of players and we’ll wait and see about the re-styling.

Longford are buoyed by the exploits of Mullinalaghta but also deprived of their players for the first three rounds at least.

Offaly appointed one of the most experienced managers on the circuit. John Maughan is on his fifth county and given his stated concerns about player availability may find himself more focused on staying put than achieving promotion.

Turlough O’Brien’s Carlow are out of the basement for the first time in more than three decades but the team has been improving for the past two seasons. Settled and with the most experienced manager in the division, they may cause problems.

An unusual feature of Division Three is that for the past five seasons, one county has slid right through it, going all the way from D2 to D4 in two years: in sequence, Derry, Laois, Westmeath, Louth and Longford. This time around, Louth, relegated with Down last year, would appear the most threatened by this trend.

In a division with so many first- or second-year managers, simple continuity ought to make a mockery of Carlow’s status as 14/1 outsiders here. Certainly shouldn’t fear the drop back to Division Four. Brendan Murphy’s latest return augments a playing panel that is already on an upward curve.

Tally is wielding a pretty sizeable new broom with Down, having tried out a dozen new – or newish in some cases – players in the pre-season games. Aaron McClements, Rory Mason and Pat Havern all showed well and can add to the likes of the Johnstone brothers, Kevin McKernan and Connaire Harrison already in situ.

Sligo are about to enter their ninth successive season in Division Three which makes them the model of consistency if nothing else. Charlie Harrison has retired and Red Óg Murphy, the stand-out underage player in the county, is off to the AFL. With long-term injuries to Ross Donovan and Kevin McDonnell, it could be a long campaign.

Ross Munnelly is back for 17th season and it’s thought likely that Cahir Healy will join the squad again after a six-year absence. On the flipside, Darren Strong and Niall Donoher have retired and last year’s league top scorer Gary Walsh hasn’t made the panel for 2019. Going the right way, however, and should be in the mix for promotion.

With Davis and Barden in the management team, you’d imagine the Longford forwards won’t want for expertise. That said, Davis could have done without Mullinalaghta’s storied success as it robs him of half a dozen players for the first month at least. Colm P Smyth is a welcome returnee after a couple of years out.

Looks like a tough road ahead for Kierans, who no sooner saw Aussie Rules starlet Ciarán Byrne return in the motherland than he lost him again to a broken ankle. On top of which, Gerard McSorley – one of the few bright sparks of the Pete McGrath era – has stepped away for a year to finish his studies.

Maughan has already spoken about the struggle of getting players to commit - little wonder that he has gone out on a recruitment drive, purloining Kilmacud Crokes forward Shane Horan under the parentage rule. No sign of the highly-touted Cian Johnson though after last year’s mini-storm over being made play for the under-20s rather than the seniors.

Cooney has made a bright start, taking them to another O’Byrne Cup final. He has brought through a handful of fringe players along the way, with Boidu Sayeh establishing himself as a leader in defence. John Heslin’s return isn’t yet certain - although it seems more likely than not - but Ray Connellan has gone back to Australia to pursue an AFL career.

Jacob Murphy snatches a point for Newcastle at Wolves 19:14
Munster ring the changes again for Cardiff’s visit 19:12
Camogie: Rockett fires two goals as Waterford edge closer to quarter-finals 19:00
Dan Martin back to third in Vuelta after a wet and wild Stage 6 18:51
Meath sub Jordan Morris earns his side a late draw with Monaghan 18:23
Crossword Get access to over 6,000 interactive crosswords