Four footballers to watch in this year's Allianz Leagues

McDaid, Gavin, Hyland and O’Donnell will be looking for opportunities to press their case 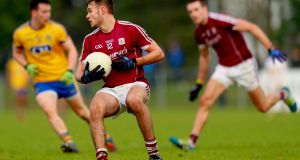 Cillian McDaid: back from Australia and could prove a major addition to Galway’s attack. Photograph: James Crombie/Inpho

Cillian McDaid (Galway)
Played a handful of matches in the 2017 league before heading to Australia to pursue an AFL career with Carlton. A combination of homesickness and limited opportunities meant his time in Melbourne wasn’t a happy one but he can be an asset to Galway now. Still only 21, he’s an exciting talent at wing-forward and if Kevin Walsh comes up with a more expansive game plan for Galway, McDaid could really thrive.

Darren Gavin (Dublin)
There probably isn’t a huge amount of space for a bolter in Jim Gavin’s squad as the drive for five kicks into gear but his namesake – no relation – has been the stand-out player in Paul Clarke’s O’Byrne Cup team. Still a bit raw and coltish around midfield, he is nonetheless an obvious leader who is powerful in the air and athletic around the pitch. Sigerson commitments with UCD could slow his progress in the early rounds but will relish his chance if he gets it.

Jimmy Hyland (Kildare)
The loss of Daniel Flynn would have cast a complete pall over Kildare’s year were it not for the knowledge that Hyland was in the post. He was rampant in Kildare’s under-20 campaign last year and the expectation around him in the county is huge now. Strong, fast and intelligent, he caught the eye in pre-season for Cian O’Neill and is almost certain to become the focal point of their attack as the league progresses.

Niall O’Donnell (Donegal)
With Michael Murphy and Patrick McBrearty both likely to be out for most of the league, there is room in the Donegal forward line for some young blood. O’Donnell threw his lot in with the under-20s last year even though Declan Bonner had given him the option of coming in and being on the fringes of the senior squad. A clever ball-player in open play, he is also a reliable free-taker.