Team-mate James McCartan remembers an elegant and committed Down man 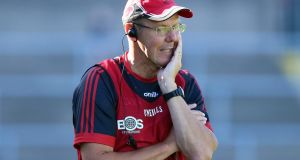 Down All-Ireland winner Eamonn Burns died on Wednesday at the age of 56. Photograph: John McVitty/Inpho

GAA president John Horan has paid tribute to Down All-Ireland winner Eamonn Burns, who died on Wednesday at the age of 56.

“It was with great sadness that I heard of the passing of Eamonn – a man who has left a great legacy in the game. On and off the field he was a great ambassador for our association and we join our Mourne County colleagues and Gaels in lamenting his loss.”

James McCartan, a Down team-mate in the 1991 and ’94 successes, remembered in particular his contribution in the first All-Ireland.

“What springs to mind, are the two points in the 1991 final. Even now, they are two of the most graceful scores, hit off the outside of the boot. Usually you’d have to re-adjust to do that but he didn’t break stride. Whenever I think of Eamonn, I think of those two points, either side of half-time.

“I used to joke that he was like the horses from the Budweiser ad, very graceful but with strength and power. He was quiet but had a great sense of fun and when he was up to no good like DJ [Kane] and Ross [Carr], he made sure that unlike them, he didn’t get caught.

“If there was any sneaking back into hotels through the emergency exit, you could be sure Eamonn wouldn’t be the first one through the door!”

He also acknowledged his team-mate’s service to the county in taking on the management role with Down’s fortunes at a low ebb.

“Like Pete McGrath [All-Ireland winning manager], who took on the job when no-one wanted it, Eamonn came in at a difficult time. He still managed to get Down to an Ulster final and beat a highly rated Monaghan along the way.”