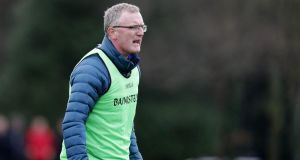 Brian Lohan: A former Clare captain, he was also an inspirational full-back on the team what won three Munster titles and two All-Ireland titles in 1995 and 1997. Photograph: Morgan Treacy/Inpho

Brian Lohan is the front-runner to be appointed new Clare manager when the process concludes with next week’s county committee meeting.

The All-Ireland-winning former Hurler of the Year declared his candidacy within the last week and with outgoing joint-manager Donal Moloney’s withdrawal of his name from consideration at the weekend, Louis Mulqueen is the only remaining contender.

Mulqueen was part of Davy Fitzgerald’s management team when Clare won the All-Ireland in 2013 and the national league three years later.

Lohan, a former Clare captain, took University of Limerick to the Fitzgibbon Cup in 2015 with a team that included Clare players Jack Browne, David McInerney, Tony Kelly and Cathal McInerney.

One well-connected source said: “The feeling in the county if you were to talk to people is that Lohan is the man. That’s not to say that there aren’t issues. There’s no love lost between him and the Fitzgeralds [influential county secretary Pat Fitzgerald, father of Davy who Lohan has publicly criticised in the past] but there is a view that personal issues shouldn’t get in the way of appointing the right candidate.”

The process has dragged on, given that the county’s interest in this year’s championship is over for nearly the past four months. Gerry O’Connor, of the outgoing management, announced his resignation at the beginning of September and called on the board to appoint his joint-manager Moloney to the position.

O’Connor and Moloney had been involved with many of the current players since the early years of the decade when they won two Munster minor championships, going on to record a three-in-a-row at All-Ireland under-21 level between 2012 and ’14.

In his statement withdrawing from the process, Moloney attributed his decision to the delay in filling the Clare vacancy.

“Due to the ongoing uncertainty over the process of selecting new management and despite the support I have received from the hurling squad, I do not wish to inhibit members of the existing management team and persons who had committed to coming on board for 2020 from missing out on opportunities as other counties put together their coaching teams.”

The process was also criticised on Clare FM by former county captain, Tommy Guilfoyle, who said:

“There’s no point in pointing fingers or blame games but [in] a decision like this – our flagship team, our senior team – all participants deserve better so maybe it’s a lesson that can be learned by the board going forward.”

It is believed that Lohan and Mulqueen were to be interviewed by a specially convened committee on Monday night with their recommendation going to the county board for debate by the clubs on Tuesday October 15th.

Elsewhere, the death has taken place of Kilkenny All-Ireland winning hurler Seán Clohessy, aged 87, from Tullaroan although he had been living in Cork for years.

Twice an All-Ireland medallist, in 1957 and ’63, on both occasions against Waterford – the same county that provided the opposition in 1959 when he had the honour of captaining Kilkenny in an All-Ireland final although on that occasion, Waterford came out on top.

1 Eamon O’Shea: ‘We spent quite a bit of time talking about older people rather than to older people’
2 Monica Seles: The warrior queen who could have been the best ever
3 Matt Williams: Six Nations must recognise the desire for revolution outside Europe
4 Billy Morton’s Santry Stadium a beacon for sporting endeavour
5 The Best of Times: Ireland women’s hockey team’s World Cup fairytale
Real news has value SUBSCRIBE

Eamon O’Shea: ‘We spent quite a bit of time talking about older people rather than to older people’ 08:00
The Best of Times: Ireland women’s hockey team’s World Cup fairytale 07:00
Michael Walker: Ian Baraclough staying on trend, from Sligo to Windsor Park 06:00
Matt Williams: Six Nations must recognise the desire for revolution outside Europe 06:00
Sport crosses its fingers yet again as ministerial merry-go-round gets another spin 06:00
Crossword Get access to over 6,000 interactive crosswords