Nicole Owens: Taking the rocky road back from injury 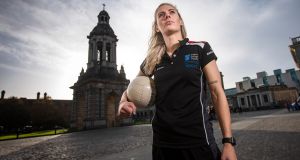 Nicole Owens couldn’t help but smile as she watched Rianna Jarrett run the hard yards so successfully for Ireland in Tallaght on Tuesday evening.

Ireland striker Jarrett clipped her first international goal in the Euro 2021 qualifier win over Ukraine having bounced back from three ACL injuries before her 22nd birthday.

Three has been a more positive number for Dublin footballer Owens, a key member of the county’s three-in-a-row winning team, though she too has been struck by the curse of the cruciate.

It was in the warm-up to the Monaghan game in July that Owens initially suffered the injury and, while she somehow returned to start against Cork in the All-Ireland semi-final, she broke down after just minutes.

The talented forward is back swimming and aqua jogging now following surgery; watching Jarrett, whom she played alongside in underage international soccer teams, perform so well gave her a considerable boost.

“I remember the first few days of . . . ‘mourning’ is probably a bit too dramatic, but it kind of was mourning because I was mourning for the rest of my year,” said Trinity alumna Owens, who has been announced as a brand ambassador for Trinity Sport. “I was looking up everything about ACLs and ended up on an article about how Rianna had done it three times. It’s great to see someone who has come back from it, it has happened again and yet they’ve managed to get to play at such a high level.”

I don’t think there’s a gap at all. I think next year it all opens up again

All going to plan, Owens will be back for a shot at four-in-a-row with Dublin in 2020. Mayo’s Sarah Rowe suggested in August that Dublin’s location, population and access to resources is going to make them very difficult to catch in the coming years.

Similar comments have been aimed at the Dublin men’s team in recent years as they’ve dominated their Championship.

“I’m not going to underestimate the support we’ve had from our county board and the sponsors that have been involved with us, but we’re still out there four days a week doing our sessions and learning year on year, exactly the same as Mayo are or Cork are,” argued Owens.