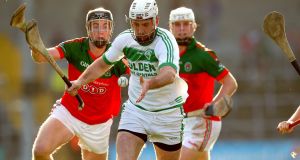 Ballyhale Shamrocks’ Michael Fennelly on the burst in the Kilkenny championship final against James Stephens in October. Photograph: Ryan Byrne/Inpho

When he leaves the warm-up and heads to the middle of Croke Park for the toss tomorrow, it will be both an end and a beginning for Michael Fennelly. Presuming all business gets done on the day, it will be his last time togging out for Ballyhale, his last time for anyone. Although still only 34, hurling’s lease on his body has run out, all extensions and allowances finally exhausted.

Young and all as he is to be putting the helmet away, it’s a small miracle that’s he’s been able to keep playing out the string this long. When Fennelly left the intercounty scene at the end of 2017, you only had to pick through the team line-ups from his last few seasons to get a sense of the toll the game was extracting from him.

In his final five seasons of intercounty, when he was between the ages of 28 and 32, Kilkenny played 64 matches in league and championship. Fennelly, in what should have been the prime of his career, started and finished only 14 of those games. A back complaint that began in 2013 never really went away, leading to knee and Achilles problems all the way to the end. He didn’t so much retire as expire.

Throughout those years, Fennelly was always a walking advertisement for the narcotic hold the game can have on you. Of all the intercounty hurlers limping around the place, he ought to have been the last one allowing his heart shout louder than the rest of his body. At the time, he was lecturing in strength and conditioning at the University of Limerick. He knew his body, he knew what he was doing to it. He did it anyway. He couldn’t not.

“I’ve only just turned 31 in February so I’m still young,” he told The Irish Times in 2016. “If I was a few more years down the line, definitely I would be questioning if the body could still take the punishment. But yeah, it will be interesting in years to come. I hope to God my body’s not going to be too bad in terms of functioning in everyday life. We’ll see at that stage whether I resent it or not.”

That stage is here and now. After tomorrow, he will be an ex-hurler. If Ballyhale win, he will retire with 13 All-Irelands (eight with Kilkenny, five with Ballyhale). Even if they don’t, he will still be leaving one of the truly great playing careers behind him. One way or the other, he’ll barely have time to consider the effects of it all. His new life has already started.

When he was 27, Fennelly left his job in the bank to go and do a master’s in sports performance in UL. He still lectures and is in the middle of a PhD in leadership and coaching, as well as being a partner in a coaching business with Roscommon football manager Anthony Cunningham. His sights have been trained on managing at intercounty level from a long way out so when Offaly got in touch towards the end of last summer and put it to him, Fennelly snapped up the opportunity.

As he put together his backroom team last September, he felt he’d managed quite a coup in getting Johnny Kelly on-board as team coach. Kelly had been a big part of Portumna’s success back in the day and was over Borris-Ileigh, who at the time were perennial also-rans in the Tipperary championship. Nobody could have imagined what would transpire from that point to this.

The night Fennelly was unveiled as Offaly manager, Kelly was on the sideline in Holycross and Borris-Ileigh lost their final group game to Moycarkey-Borris. Ballyhale hadn’t even had their first game in the Kilkenny championship. Calculating the odds on neither of them losing a game across the following four months of hurling would have left anyone’s head throbbing.

Yet here they are. Last weekend, Fennelly and Kelly stood side-by-side in Navan as Offaly won the Kehoe Cup with a one-point win over Antrim. Tomorrow, they’ll face off in Croke Park, Fennelly holding the middle of the Ballyhale defence at centre back, Kelly on the line for Tipp champions Borris. Next Sunday, they’ll huddle up once more as Offaly play their first competitive game of the Fennelly era, a Division 2A encounter with Meath in Birr. The world spins in funny loops, all the same.

Kelly is himself a fascinating character. He’s one of those life-with-no-other-life coaches, always with a couple of teams on the go here and there. He was in the background at the start of Portumna’s glory days and at the forefront of them by the end. He won an All-Ireland intermediate title with Galway in 2015 and was involved with their under-21s around then as well. Borris is his second coaching job in Tipperary, having coached Kiladangan at the start of the 2010s. He managed Coolderry to an Offaly title along the way too.

Borris hadn’t won a Tipperary title in 33 years before this one – and even when they did, they were well down the pecking order in most people’s All-Ireland thoughts. Since then, they’ve taken out Glen Rovers, Ballygunner and St Thomas’s, all of whom would have fancied the road ahead. Kelly’s role in it all is something he likes to play down but he’s fooling nobody.

Least of all, tomorrow’s opposing captain.