After RTÉ axed him, it's no suprise Eir offered him a slot, but did he have to take it? 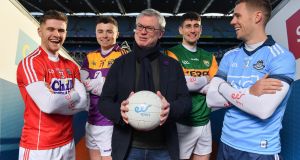 “If you’re the only one out there with a pitchfork, you’re in danger of becoming irrelevant,” declared Joe Brolly in explaining this week why he decided to bow the knee and sign up as a GAA analyst/provocateur for the subscription sports channel Eir.

The fear of becoming “irrelevant” is probably the worst reason anyone can ever give for doing anything, not least abandoning a principle for which you had fiercely and admirably fought through the last decade. And anyway, irrelevant to whom? And, more importantly, relevant to whom? The culture? The national consensus? Brolly is clearly one of the brightest cats on this beautiful, dismal island; deep down, he has to understand the idea of public relevance is just a conceit. It’s a vanity. And it’s no excuse.

If you aren’t up to speed with the media career of Joe Brolly, the former Derry All-Star was, for almost two decades, the enfant terrible of RTÉ’s summer GAA team, striking a vaguely foppish pose as he lounged between the schoolmasterish Colm O’Rourke and the vexed Pat Spillane for what became a kind of iconic triple act. When he wanted, he could deliver a perfectly reasonable assessment on a passage of play or score, substantiated by his days as a sprite of a corner-forward who somehow survived the killing fields of Ulster football in the 1990s.

But stating the obvious bored Brolly, and even watching on television you could tell that his mind was whirring with the excitement of the big picture: that this was a show reflecting Ireland’s national pastime; that it was about escapism and enjoyment and passion and a celebration of Irishness; and that it was his role to get the public talking and laughing.

And he had a talent for it. He had some streak of showbiz running through his blood. Sometimes he was funny, sometimes a windbag, sometimes dark, occasionally riveting and – once or twice – catastrophically cloth-eared and insulting. He got that people didn’t always like what he said and – crucial for a television analyst – he didn’t give a toss. He just said it.

And when the GAA began cutting deals for subscription channels such as Sky and Eir, he was outraged. How dare the GAA? How dare they sell games to profit-making companies? Didn’t they know that there were Gaels out there, volunteers many, who didn’t have these channels? Didn’t they have the right to see their county playing on television for free?

The world didn’t listen, of course. It never does. That’s not the point. Brolly had the bit between the teeth. He’s a barrister. He knows it was an argument he could win a million times over. And he used to enjoy poking fun at Sky’s minuscule television audience. Nobody’s watching, he’d chortle gleefully.

Then, last September, RTÉ axed him between the All-Ireland final draw and replay. There is no doubt that Brolly is genuine when he says that he was “hurt” by the treatment. And, after two decades, it was shabby treatment. The new head of sport, Declan McBennett, wanted to go in a different direction. That was his prerogative. But the whole scene felt like the new schoolmaster coming in and expelling the kid who got all the As but then set off the fire alarms, who played Chopin at the school concert and then glued the piano lid for the crack.

Brolly instinctively knows the deathly danger of dullness. It made him ratings gold

It felt punitive. And it was a strange business. With other “players” in the game, RTÉ was now in a battle for ratings. Brolly railed against the new preference, which was driven by analysis and statistic rather than the hot and heavy opinion of the old order. RTÉ, he felt, was mimicking the Sky Sports formula of punditry. And that did seem odd. Why try and imitate a show that has about one thousandth of your own audience reach?

And, by cutting Brolly loose, they must have known that a rival would snap him up. All sports shows are now crowded with former players who believe that television is just about pulling on the chinos and the desert boots and giving their “opinion”. And, to an extent, it is. But the earnestness! Good Jesus, the earnestness of it all. Brolly instinctively knows the deathly danger of dullness. It made him ratings gold. So he was always going to get the offer from rival channels. But why did he take it?

“Jarlath Burns, a pal of mine, he’s going to be the next GAA president, said leave that alone, it’s done, it’s never changing,” he told Ger Gilroy and Eoin Sheahan when he appeared on Off the Ball in one of his if-you’re-explaining-you’re-losing interviews he gave after signing for Eir. How lame! And how disappointing! Big Jarly says, “Wise up, Joe,” and Derry’s dynamo, her irrepressible contrarian, shrugs and says okay. Give us yon contract, boys. Where do you want me to sign? Will yez give me all the Dublin league games at least? Do I get the Eir channels too?

Maybe Brolly believes that even a subscription Joe – a GI Joe, if you will – is better than no Joe Brolly at all. It was probably too much to hope that Brolly would have done the coolest thing of all and just walk away from TV land and become an independent soul and have them prise that f**king pitchfork out of his cold dead hands. That he would become gloriously “irrelevant” – which tens of thousands would have noticed and quietly admired and thought: at least the wee hoor stuck to his guns. He could have become the Paddy McAloon of the GAA world.

There are times – in his long video interview with Dion Fanning, say – when Brolly drops his childlike need to entertain the adults and to please and be seen, when the public gets to meet an absorbing and burningly bright and thoughtful and conscientious public figure. His media career shares the same tragic flaw as that of Eamon Dunphy: he doesn’t seem to get that you don’t always need to be out front with the dancing horses. You don’t have to be shouting the odds to have a voice.

You could listen to Brolly all day in that mode, when he takes off the greasepaint and forgets about the television lights

There was a moment when he was chatting to Ger Gilroy when he suddenly deviated – and Brolly is always at his best when he’s lightning-struck and indulges in a tangent – to a day in the Killybegs community hospital with Barry McGowan.

“The great Barry, the great unheralded maestro of Donegal football, he brought me up there,” he rhapsodised. And it was just the perfect description of McGowan, who was indeed a prince of a footballer and who is seldom spoken of; who, unfazed and aloof through the maddest days, won an All-Ireland and quietly left the stage. You could listen to Brolly all day in that mode, when he takes off the greasepaint and forgets about the television lights.

But it’s time to go now: I’m an Eir customer and a text has just come through. It’s an offer to see Conor McGregor take on Donald “Cowboy” Cerrone at the T-Mobile in Vegas this Saturday night on ppv for just €25.

Well Joe Brolly, what d’you think of that?