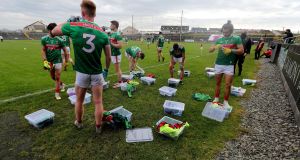 Mayo players before the start of their Allianz League game against Galway on Sunday. Photo: Bryan Keane/Inpho

The GAA will consider the Government announcement of a move to Level 5 Covid restrictions for the next six weeks. The exemption for the football and hurling championships was unexpected given the statements last week by Tánaiste Leo Varadkar, which appeared to rule out Gaelic games being permitted to continue at Level 5.

Although not specifically mentioned in Taoiseach Micheál Martin’s address on Monday night, the elite sports’ exemption was later confirmed by the Minister for Health Stephen Donnelly in an interview with Claire Byrne.

Whereas the GAA had originally been of the view that, in the circumstances, it would not be possible to maintain the intercounty season, the association has also consistently committed itself to following public health guidelines from the National Public Health Emergency Team (Nphet) and the Government.

There was a meeting on Monday evening of the GAA’s Covid Advisory Group to review the situation but there will be no statement from Croke Park until Tuesday.

The likelihood is that the games will proceed after just resuming last weekend with a round of league football matches.

The association did release a fixture list for the coming weekend, which includes the start of the 2020 championship with Leinster and Munster hurling matches on Saturday and Sunday.

The Gaelic Players Association will also convene a meeting in the next 24 hours or so to consider its position. A poll of its members last week indicated that 52 per cent of county players were happy to proceed with the season whereas 24 per cent were not.

A further 24 per cent were prepared to play if implementation of Covid protocols was improved. The ballot also authorised the GPA’s National Executive Committee to make any further decisions on its behalf during the season.

The NEC is believed to have been divided on whether the season should proceed but it is thought more likely to green-light the games than to pull the plug. They are likely to press concerns about testing protocols and that concern was expressed by Louth captain, Bevan Duffy on LMFM on Monday.

“The protocols need to be better, without a doubt. There hasn’t been any testing at all, which I can’t get my head around. Surely before the start of the National League campaign every intercounty squad should have been tested. Simple as.

“What if someone tests positive on either of these squads next Tuesday? And there are lads after playing a match here in Páirc Uí Chaoimh and then gone back to their homes and back all over Cork and all over Louth.

“The lack of testing, the zero testing, I just can’t understand it.”

The GAA has emphasised that rapid testing is available for county panels if requested by any team’s medical officer, as was the case in Wexford last week when, after an outbreak among some club footballers, both the county panels were tested, with two positives being discovered among the hurlers.

The association has, however, drawn the distinction between responding to concerns in a county and routinely screening all players, as is the protocol within professional sports set-ups.

Professor Mary Horgan, an expert in infectious diseases and a member of the GAA Covid Advisory Group, earlier in the summer expressed doubts about the effectiveness of general screening.

Pointing out that testing is at its most reliable when someone has symptoms, Prof Horgan also referenced the case of former Essendon AFL player Conor McKenna, from Tyrone, who registered a false positive before two further tests showed as negative.

“I don’t see any benefit in routinely screening as they have done in golf and rugby. I don’t think it’s cost-effective and it may not give you the right answer. If however anyone in a team has a cough or a fever they should get tested and followed up.”