Just five appointments remain to be finalised for the 2020 season 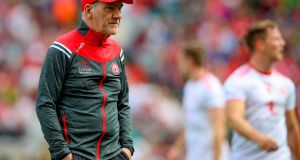 There are just five vacancies left in the list of county football managers for the coming year.

Galway, London, Laois, Wicklow and Tipperary have yet to make their new appointments whereas Carlow and Limerick are expected to ratify outgoing managers Turlough O’Brien and Billy Lee at upcoming county board meetings.

Mickey Harte will against be the longest serving manager, as he enters his 18th year in charge of Tyrone. He is also the joint-second most successful with three All-Ireland titles won in 2003, ’05 and ’08, a haul he shares with new Kildare appointment Jack O’Connor, who also led three successful campaigns – coincidentally in the years following Harte, 2004, ’06 and ’09.

Of current managers, Dublin’s Jim Gavin, currently in an extended tussle with Kerry’s Peter Keane for this year’s Sam Maguire, has directed the greatest number of All-Ireland victories, five.

To date there has been a small reduction in the number of outside managers with seven as opposed to eight appointed so far but that may rise when the remaining vacancies have been filled.

The highest-profile departure was probably the most recent with Galway’s Kevin Walsh stepping down after an eventful five years, which saw a number of improvements – promotion to Division One, a first Connacht title in eight years and bridging a 53-year gap by beating Kerry in the 2018 football championship.

The county’s under-20 management, led by former All-Ireland winners Pádraic Joyce and John Divilly, would be obvious successors but they have yet to indicate whether interested in stepping up.

There were 13 new managers appointed last year and all of them will still be involved in 2020.

After Harte, Gavin has the next greatest longevity and next year is due to be his eighth season in the Dublin hot seat, making him the county’s longest serving manager since Kevin Heffernan stepped down in 1985.

With Malachy O’Rourke having stepped down in Monaghan, Clare’s Colm Collins is next in line after Harte and Gavin, as he embarks on his seventh year in charge.

The most experienced man in charge is arguably Offaly’s John Maughan, who although he hasn’t clocked up Mickey Harte’s near two decades in charge, is currently on his sixth tour of duty with five counties in all four provinces.

In 2020 it will be 29 years since he took over as Clare football manager, winning the All-Ireland ‘B’ championship in his second season and memorably taking the county to a first Munster title in 75 years, beating Kerry in the 1992 provincial final in Limerick.

Maughan went on to enjoy success with own county, Mayo, who in his first season he took from Division Three to a Connacht title, an All-Ireland semi-final win over Kerry – the county’s last until 2017 – and an All-Ireland final replay against Meath, which they lost by just a point.

Although he would reach two further All-Irelands with Mayo, including during a second stint in 2004, the 1996 final was as close as he came to lifting Sam Maguire.

Seasons in charge of Fermanagh and Roscommon weren’t as successful but last year, returning after a lengthy absence from the inter-county scene, he led Offaly to round three of the qualifiers.

Maughan is one of the advocates for a Tier 2 championship, a concept that will be decided on at a GAA special congress in October. Eligibility for the new grade is likely to be determined by league standing so there is likely to be a rush to get out of Division Three next spring.

The division will contain one anomaly in that Cork, having reached the Super 8 quarter-final round robins in Ronan McCarthy’s second year in charge, were relegated from Division Two last year.

However if the provision allowing provincial finalists continue in the Sam Maguire, Tier 1 championship applies the county will be fancied to emulate its 2019 progress of getting to the Munster decider in which they were narrowly beaten by Kerry last June.