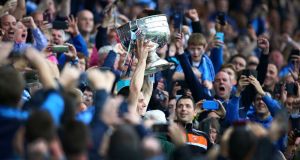 Dublin captain Stephen Cluxton lifts the Sam Maguire after their win over Kerry in 2015, the first All-Ireland title in the drive for five. Photograph: Cathal Noonan/Inpho

It was former Kerry secretary Tony O’Keeffe who observed that the county had a very respectable record of being present for big occasions in GAA history. Off the top of his head he cited the opening of the old Cusack Stand, the Polo Grounds final in New York, the Centenary final in 1984 and the Millennium final in 2000.

An impressive litany but it’s safe to write that this weekend Kerry arrive in Croke Park, exceptionally keen not to be here for another historic occasion, the completion of a first five-in-a-row All-Ireland championship sequence in either football or hurling in the entire 135-year history of the GAA.

That Kerry are the final-day opponents is appropriate in the context of history and contemporary rankings. All decade Dublin have found this fixture troublesome and apart from the dam-burst at the end of the 2013 semi-final, there’s never been more than a score between the teams.

This has been partly due to some terrific tactical coups, like the unanswered 2-4 before half-time in 2016, which came from some aggressive pushes on Stephen Cluxton’s kick-outs.

Dublin haven’t been properly tested in sudden-death championship since the 2017 final whereas Kerry have had to dig for a couple of matches this year. The champions’ reliance on power plays has irradiated most challenges along the way but there can come a day when that doesn’t happen and unease develops as opposition confidence grows.

Five years ago, for instance, Dublin’s free-scoring bench had all the answers until the semi-final against Donegal when they didn’t.

Peter Keane’s team arrive in a haze of medium-term optimism and a short-term sense of possibility, their burden lightened by being possibly the longest-odds Kerry team ever to contest an All-Ireland.

Talent from five All-Ireland minor victories is emerging, especially up front where David Clifford and Seán O’Shea are already sparkling in concert with 2014 All-Ireland winners Paul Geaney and Stephen O’Brien, who has been transformed – from a player caustically said to have run up more cul de sacs than he had run out of – into a Footballer of the Year candidate.

Their defence is more of a work in progress and hasn’t looked that secure this summer from Cork’s bombardment in the Munster final to the shoot-out with Donegal and most recently in the semi-final when an isolated Cathal McShane made hay for Tyrone despite being outnumbered and Kerry playing a marooned-looking Paul Murphy as a screen at the back of the middle third.

There’s been something approaching a consensus that centrefield will be the key influence on how this final progresses. This is because the two prime movers on either side are located there, David Moran for Kerry and Brian Fenton, whose calling card was a man of the match award against the same opponents in the 2015 final.

The view in Kerry is that Moran needs to take on Fenton but there has also been speculation that Jack Barry, who has stifled the current Footballer of the Year on a couple of occasions, could be deployed instead. That seems to overlook Barry’s form this summer, which is the reason he hasn’t been starting.

There is a possibility Dublin may push up James McCarthy and detail him to mark Moran with Michael Macauley dropping out and either Cian O’Sullivan or Eoin Murchan coming into defence. Either way, Kerry need their senior centrefielder in the game. A good performance won’t guarantee a win but a subdued one makes defeat all but inevitable.

For all Fenton’s ascendancy since arriving on the county scene, Moran was MOTM in the 2017 league final between the counties and the Dublin player the only centrefielder not to score on the day.

In the two years since, though, Fenton has been awesome. Dublin’s overall infrastructure is also better, as Brian Howard is such a good fielder and Niall Scully’s pace makes him a target if Cluxton goes to beat the press – as he did so productively in the last two years against Tyrone.

The stakes are so high because of the importance of feeding the respective inside forwards or, put another way, of ensuring that they’re not fed. Con O’Callaghan and Paul Mannion have been so devastating this summer that, well supplied, they will very quickly finish this as a contest.

Defensive match-ups will be critically important given that quality of attacker on either side and encouragingly for Dublin, Kerry have been under more pressure. They play seven defenders without using a sweeper, deploying the seventh as a blocking wing forward, in this case designed for Jack McCaffrey.

Dublin’s replacements are better balanced and more convincing even if the paradox of the Diarmuid Connolly option is that bringing him in early probably means things are going wrong in which case it’s a gamble or else it’s a meaningless couple of minutes.

There is however a case to be made that his flair for distribution or quarter-backing could be invaluable in a match with a premium on getting quick, accurate ball into a lethal forward line.

Tommy Walsh did really well for Kerry coming into the semi-final but to what extent did he drive the recovery as opposed to benefiting from and enhancing it? Kerry had moved to within a point of Tyrone and he added to the momentum but could he be this year’s party piece against Dublin?

Throughout their recent record-equalling sequence Dublin have been deemed vulnerable in the air but in the 36 fixtures since their last defeat, 21 have seen clean sheets and the average goal concession per match for the four-in-a-row has been .64, dropping this year to .25.

Put another way, if high ball is so lucrative why hasn’t it paid out more?

The ultimate question is can Kerry – like Mayo in the semi-final – exert sufficient pressure throughout the field to stop Dublin gaining an edge in enough individual contests to crack the collective opposition resistance?

Not on the basis of what we’ve seen so far: history in the making.