Old traditions of being Kerry captain nothing new for Gavin White 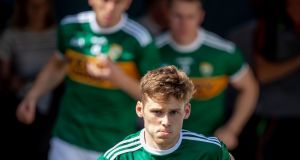 Gavin White is listing off some of the idiosyncrasies of being Kerry football captain and it makes for interesting tradition.

He’s 22-years-old and has never played a single league game for Kerry. He’s won two All-Ireland minor titles and is yet to lose any game against Dublin. He played a big part in the semi-final win over Tyrone but he’s not entirely sure of starting Sunday’s final at Croke Park.

It’s partly explained by the old Kerry tradition of gifting their county football champions the right to nominate the team captain and, while this hasn’t always settled well, White certainly has no complaints. Starting or not starting he’s gunning for Sunday’s game.

He came on at half-time in that semi-final, replacing wing back Shane Enright but operating around wing forward; he’s featured at some point in all six of Kerry’s championship games this summer; last summer he started in all five.

White describes his role in the team as “a bit of everywhere, really, at the moment” and manager Peter Keane also knows well how to get the best out of him. Like the rest of this Kerry panel, White is the essential team player.

“I don’t know how many players Peter has used in the championship, has there been 28? [yes 28] That’s a huge number now, like. Everyone has been given their chance. From my point of view, I started off the championship at wing back and I’m wing forward now, and just given instructions to go out there and work like a dog basically. Defend as much as you can, get forward as much as you can.

“I don’t think much has changed really. When I was playing at seven or on the half back line, my game was going forward. Now I would see myself as a strong defender as well. I play more around the middle, everywhere really. I’m kind of given the license to do a bit of everything.

“Obviously everyone wants to start, but I don’t think it makes a whole pile of difference, to tell you the truth. If it helps Kerry to win an All Ireland you’re going to do that – if it’s starting on the first 15 or coming off the bench, you’re going to do as much as you can.”

Not yet featuring in the league is explained by the fact White was off preparing with his Killarney club, Dr Crokes, for another All-Ireland club championship final, having been involved since their title last win in 2017. That St Patrick’s Day final ended in defeat to Galway champions Corofin and White’s return to the Kerry panel was further delayed by an elbow injury.

Not surprisingly, White favours the move to end the club championship within the calendar year, thereby eliminating the clash. Paul Murphy wore the captain’s armband while White was away (or when he doesn’t start) but it’s more than just the game time he misses.

“This year has been a funny enough sort of year, again missing the league because of the club championship, there’s no way around it really I suppose, but obviously I’ve missed three, four months.

“I think naturally you are [behind] a small bit, and I’ve also missed three or four months of bonding with the team, tactics, whatever like, hard training, going up the country. Naturally when you’re going up the country, staying nights, there’s a bond starting to build there and [through] no fault of my own I missed those type of scenarios.

“Meeting with the new management as well, I didn’t really get to meet him [Peter Keane] until after the club championship this year, it would have been after April. Then I picked up an injury with the elbow and that ruled me out for however many weeks. Look it, it’s something that’s been looked at as far as I know already and the club championship has been changed, but it definitely does affect you on the inter-county scene, because as I said I haven’t played any league.”

Watching Kerry beat Dublin in Tralee in the league back in February brought mixed emotions.

“You’re up on in the stands watching the game, itching to be out there and obviously you want to put on a Kerry jersey as much as you can. I suppose you are fully committed to Crokes going into an All Ireland club and you’re focus is on that, but in the back of your mind you’re still going to all the Kerry games and there’s maybe something that if you could play could you make a difference and you’d love to be out there.”

White’s own unbeaten run against Dublin is also explained by the simple fact there is no tradition; he’s yet to play them, at any level. They never crossed paths under his All-Ireland minor wins in 2014 and 2015, under then Kerry minor manager Jack O’Connor. But he still knows exactly what to expect in Croke Park on Sunday.

“In the last couple of years Dublin have changed Gaelic football forever,” he says unflinchingly. “Their athleticism, the way they move the ball so quickly, there’s a lot of things to pick out; they’re just a very, very, very good team.

“I think they move the ball quickly, they don’t pack defences, they go man-to-man and their ability to just blow teams away has been mesmerising in the last couple of years. It’s just when you look at that Dublin team you think of athleticism and that’s just the way the game is going.

“Our motto this year has been to sort of release the pressure on ourselves, really. I don’t think we’ve played with pressure on our backs and we kind of just expressed ourselves as much as we could.

“I know it’s a big deal to the Dublin team [the drive for five] and it’s a massive achievement even to get to the position they’re in. But from our point of view we’re just going to play the best that we can and give the performance that we can.”

White credits Jason McGahan, the Kerry strength and conditioning coach, for maximising their own athleticism, proven in the way they closed out the game against Tyrone.

“At half-time we changed up a small bit and we all kind of knew if we stuck to the task, then to get the performance in the second half was obviously a huge confidence boost going into the final rather than crawling over the line.”

And while the Kerry captaincy hasn’t always settled well on the shoulders of a Dr Crokes player, it did in 2014 final, when Fionn Fitzgerald and Kieran O’Leary co-captained the team that beat Donegal. Such is Kerry tradition.

Gerry Thornley on pitfalls of a home and away Six Nations; Premier League return edges closer 07:03
Record numbers watch Woods v Mickelson charity match 06:28
Darcy says enforced break could end up being a positive for Dublin 06:00
Eddie Dunbar stays in the saddle as he eyes a return to the grand stage 06:43
Aviva 10-year ticket holders seek clarity over payment 06:37
Crossword Get access to over 6,000 interactive crosswords