Dublin march on towards title defence as they see off Cork 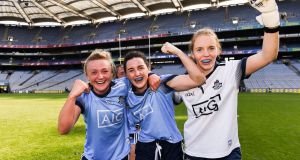 Having finally cracked the code last September when they beat Cork for the first time in a Championship game at Croke Park, Dublin appear to be getting the hang of it, Mick Bohan’s side coming out on top once again against their long time nemesis, winning on this occasion by six points to keep their three-in-a-row aspirations alive, alive oh.

For 41 minutes of the game, played in front of a crowd of 10,886, it was much like the bulk of the contests between these counties over the past decade, barely a hair’s breadth between them, but once substitute Caoimhe O’Connor blasted the ball past Martina O’Brien in the Cork goal, just two minutes after coming on the field, Dublin took control of the game and never relinquished it.

There were two late changes to both sides, Noelle Healy and Jennifer Dunne dropping to the bench with teenager Niamh Hetherton and the experienced Nicole Owens replacing them in the Dublin attack. Meanwhile, Cork captain Doireann O’Sullivan, who had been named as a substitute, started the game in place of Aine O’Sullivan with Saoirse Noonan coming in for Libby Coppinger.

It was Owens who began the move that led to Dublin’s opening point, the ball ending up with Carla Rowe who slotted it over from wide on the left, but her involvement ended after just three minutes, the Sylvesters forward hobbling out of the game, struggling to put any weight on what was already a heavily strapped knee.

Oonagh Whyte replaced Owens and restored Dublin’s lead after Orla Finn had levelled, by then Ciara Trant denying Doireann O’Sullivan when she smothered her shot on goal.

The point-trading continued for the rest of the half with never more than one separating them, the teams tied six times. Sinead Aherne, Lyndsey Davey, Niamh McEvoy and Rowe all gave Dublin the lead only for Cork to respond each time, Finn’s immaculate free-taking their chief source of success. It was with her fourth conversion that she put Cork ahead for the first time after Niamh Collins had fouled Noonan, but it proved to be the only occasion they nudged ahead in the contest.

Another Aherne free sent the teams in at 0-07 each at half-time and it wasn’t until seven minutes after the break that there was even a hint of daylight between them, brilliant fielding from Aherne setting up Healy, who by then had replaced Hetherton, to put them two points clear.

The key passage in the game, which coincided with Cork full-back Eimear Meany being sin-binned for a foul on Aherne, came soon after when Cork substitute Aine O’Sullivan saw her shot goes inches wide of the right post, only for Dublin to go up the other end of the field and get the game’s first goal, Healy picking out O’Connor who rifled the ball home to make to 1-10 to 0-9.

By now, Dublin were shifting through the gears, taking control of the game, pressing Cork back in to their own half and for a 17 minute spell the Munster champions failed to score. But Dublin’s stray shooting prevented them from having a comfortable cruise to full time, their lead still just three points until Aherne wrapped it all up by converting a late penalty awarded after Niamh Collins was hauled down.

In three weeks’ times, then, Dublin will be back in Croke Park, their opponents Galway, with the aim of becoming just the third county, after Kerry and Cork, to complete a three-in-a-row.