Kerry missed 2-8 from play, under the same conditions can they be as wasteful again? 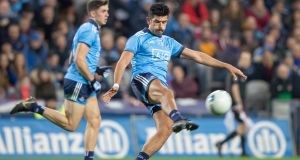 Kerry have now won two and drawn two of their last five meetings with Dublin. Overwhelming favourites again for the replay? Under the same tactical conditions, I’m not so sure Dublin should be.

The Dubs pride themselves on the learnings they take from every performance, after 1,443 days in possession of Sam Maguire they were very nearly beaten in Sunday’s drawn final, so there's plenty to learn.

Both a look back at the one win they managed in those last five meetings, and the victory that got the bid for five-in-a row underway in 2015, clearly illustrate the importance of Cian O’Sullivan as a sweeper centre back. And point the way to a comfortable victory in the replay, even if it mightn’t be in style.

Dublin beat Kerry by 12 points during last year’s league campaign. At half-time in that Croke Park encounter Dublin led 1-8 to 0-8. A young Kerry team including David Clifford and Sean O’Shea, in their debut season, had 15 first-half attempts from play but only converted eight points from a possible 3-12.

Kerry led by two after the first quarter but their profligacy soon caught up with them. To the fore was Clifford, scoring 0-2 from play, winning a free he converted himself and assisting a score for O’Shea. Yet even he kicked two poor shots, in a half to forget for his marker. And one Dublin breathed a sigh of relief after.

Before his stint at midfield and his subsequent deployment as a sweeper centre back, Cian O’Sullivan began as a corner back. And in 2011 he was probably the best corner back in the country, when fit.

On this day Jim Gavin thought he was the man with the height and experience to curtail Kerry’s young upstart. But when David Clifford is given good ball, and left in a one-on-one situation, there is no dealing with him. Tall, elusive, two footed, the list of adjectives goes on and on for the 2018 All Star corner forward.

At half-time, O’Shea and Paul Geaney were taken off, together they’d already missed enough to win it. Jonny Cooper switched on to Clifford and O’Sullivan began to sweep from centre back.

Once his man was no longer an obvious threat O’Sullivan would drop back into the danger zone. Closing the space for Clifford to roam into and slowing down the early long kick-pass. He cut out three balls, his protection allowed Cooper to take more chances and Clifford touched the ball only three times thereafter. Dublin won by 2-17 to 0-11.

But other than those dominant 35 minutes, there’s been nothing between the two teams in their previous five games. And the same was the case in their last clash before that quintet - the 2015 All-Ireland final.

The current Kerry team contains Clifford, O’Shea, Geaney and Stephen O’Brien. They form the most talented forward division in the country. Last Sunday was Clifford and O’Shea’s first All-Ireland senior final, but they make up for experience with fearlessness.

In 2015 Geaney was joined in the full-forward line by 2014 Footballer of the Year James O’Donoghue and eight-time All Star Colm Cooper. So not a bad attacking unit either. Albeit in wretched weather conditions, Dublin held them to just 0-9. O’Sullivan was an injury doubt going into the final and was replaced after an hour, but in that time the Kingdom’s attack had only managed 0-8 from play.

Geaney, O’Donoghue and Cooper had scored 2-10 from play between them in Kerry’s semi-final and quarter-final wins. But in the decider, O’Sullivan’s positioning allowed for more gambling from his full-back line, and along with the team’s general intensity and workrate, Kerry were forced down the wings and into snap shots under pressure.

For 16 of their 18 scoring attempts from play while he was on the field, O’Sullivan was positioned in the heart of the scoring zone. He’ll only mark his man when they’re a scoring option and not picked by a team mate tracking back, and his eye for danger and reading of the game is second to none. However, he only cut out one pass in that final, he didn’t need to do any more.

Every time a Kerry player looked up he was in their line of vision, forcing them out wide, to recycle, or shoot when they probably shouldn’t. The forward line did not have the space afforded to the Kerry attack last Sunday; this Dublin team were focused on getting the job done and weren’t taking any unnecessary risks in their game plan.

Twelves months earlier Donegal had exposed Dublin’s man-on-man defence. In 2014 the team were conceding an average of 0-17 per game. Donegal scored 3-14 against them in that semi-final ambush. But thanks largely to O’Sullivan, Dublin learned their lesson and there’d be no repeat collapse in 2015.

The 2015 victory was the team’s second All-Ireland under Gavin, and it was won ugly. They’d dropped their average concession to 0-13 and scored a point less in the final.

This year O’Sullivan is again struggling with injuries and he remains a doubt for the replay after being an unused substitute against Kerry last Sunday. In the draw, Kerry had 20 scoring attempts from play. They converted only 1-9 from a possible 3-17, but with O’Shea unerring from placed balls they still got 1-16 overall.

Clifford only scored 0-2 from six attempts, Geaney missed both of his efforts, and O’Shea missed one of three while O’Brien scored with his only shot. So from play, Kerry’s four best finishers missed 1-6. But still caused havoc.

Kerry attackers do back themselves from that little bit further, and they like their shots on the arc from either wing. Which makes them very hard to defend in one-on-one situations as they’ll step outside and let fly. But O’Sullivan, operating in the positions he did in 2015, will slow down the initial delivery and give his defenders a better chance to contest. Forcing Kerry shooters even further from the scoring zone, in a much more congested back line overall, as well as limiting the goal threat.

In 2015 Kerry sent in nine long balls, but none resulted in a score. No Dublin defender was left isolated in a one-on-one situation, like Cooper was for his penalty foul last Sunday.

This Dublin team are nowhere near as naive defensively as in 2014 - some of their tackling and positioning in the drawn final was superb - but their new system relies upon collective responsibility rather than one player carrying out the majority of the sweeping and covering duties.

Dublin can at times have close to 15 men in their own half when defending, but can still be caught out with no cover against quick, quality ball. Last weekend they afforded more space and opportunity to Kerry’s sharpshooters than any other team would even fathom.

Can Kerry be as wasteful again? Dublin can’t afford to wait and find out. At the other end the champions took on nine shots from play themselves that were clearly outside of the scoring zone, via six different shooters, and only scored one. This team have become almost robotic in their disciplined shooting inside of the scoring zone in the past two years in particular. So this was most uncharacteristic.

A 15 man Dublin surely can’t play as bad in an attacking sense again. But a more confident, Kerry will be a lot better too. If they bring the same fight, hunger, discipline, and if Dublin try to out-football them.

As was the case at the start of the five in a row, Dublin need to close down the Kerry attack. They need to get back to winning ugly. At both ends. That approach will inevitably bring them back to Cian O’Sullivan.

1 Reality Bites – Tales from the new normal: Caitríona Cormican
2 Nicholas Quinn: ‘Swimming became how I dealt with grief’
3 Ian McKinley: ‘You do take for granted the simple things in life’
4 A beautiful, happy accident - Moneyball is the best sports movie ever
5 James McClean still failing to learn his own online history lesson
Real news has value SUBSCRIBE