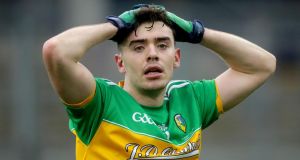 We are reliably informed that Leitrim had only played at Croke Park four times before Saturday’s Allianz League Division 4 final, and lost the lot.

We suspected we were witnessing history then as the tiny Connacht county, roared on by an estimated 10,000 supporters – 300 supposedly flew in from America for the occasion – grabbed Derry by the throat.

With 21 minutes on the clock, they led by 0-6 to 0-3 and dominated the exchanges to such a degree that their wides tally outnumbered Derry’s by six to zero at that stage.

That, unfortunately, is where the fairytale ended for Leitrim who fell behind by half-time, were dominated in the third quarter and ultimately rued their high wides tally of 13. But there’s always next year.

“I think they actually have the ability to come back here next year if they apply themselves and work hard,” said Leitrim manager Terry Hyland.

“I said that to them in the dressingroom and I’ve no problem saying it publicly because I think there’s an awful lot more in these lads.

“I do think the wides ultimately killed us. You can look back at the ratio of wides from both sides and it’s not hard to work out where it went wrong for us. I keep telling the lads, we have statisticians and experts but the biggest statistic is always the scoreboard. If you don’t keep that right it doesn’t matter about the rest of the stats.

“Maybe we were shooting a little bit on sight when we should have really steadied the ship and said, ‘let’s make sure of this score’. Perhaps that’s a little bit of inexperience but they’ll improve on the back of that.”

Six Derry points in a row before half-time allowed Damian McErlain’s side to go in 0-10 to 0-7 ahead at the interval.

With the wind behind them in the second half they moved six clear at one stage and never looked like coughing it up despite a couple of kitchen sink moments late on as Leitrim desperately chased a goal.

Shane McGuigan was terrific for the Oak Leafers with five second-half points while captain Christopher McKaigue boomed over two beauties.

In truth, it was no more than we expected from a Derry side that won the Division 2 title in 2013 and competed in the Division 1 final in 2014.

Still, Hyland felt Leitrim made life easy for the favourites at times.

“We probably lost our kick-outs just before half-time and handed them possession,” he said.

“We probably got a little bit lazy on the field, we didn’t make the runs to create the openings. Maybe it’s a little bit of a lack of experience and someone just not standing up and giving direction on the field but that’ll come to them.”

Leitrim’s Ryan O’Rourke, with 4-22 to his credit beforehand, added another six points and displayed his class at times, underlining the talent that exists in the lowest tier.

“Maybe sometimes the hierarchy in Croke Park forget that there’s 32 counties in Ireland, they usually only talk about the top 16,” remarked Hyland, who took Cavan to the 2013 All-Ireland quarter-finals. “But if we didn’t have the other 16, we wouldn’t have an All-Ireland championship.”

There have been bigger days for Derry at Croke Park, much bigger ones, so they weren’t lighting any bonfires around Bellaghy, Coleraine or Ballinderry afterwards.

The nagging feeling was that if they start as slowly again on May 12th against Tyrone in the Ulster championship, there may be no way back.

“It’s better it happened now than against Tyrone,” said McErlain. “If we give ball away like that against Tyrone they will just score at the other end, whether it’s a point or three points.

“Those are the learnings, that’s the difference and we have to try to bridge that gap between Division 4 and the level we’ll face in the Championship. Leitrim and ourselves were probably significantly the two best teams in Division 4, but we’ve now got to step it up another gear in terms of pace, athleticism, opposition punishing your mistakes and all of those things.

“We’re by no means the finished article but we have Tyrone there to absolutely sharpen our focus.”