Sideline Cut: Poles-apart Mayo and Kerry have never been closer

Sideline cut: Mayo have seen a sea-change since All-Ireland loss to Kerry in 2006 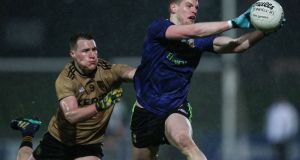 Minutes after the All-Ireland final of 2006, Kerry manager Jack O’Connor made his way into the Mayo dressing room with a sympathetic expression and all the right words. For those in Croke Park and watching around the world, it had been an unsatisfying afternoon: the final that started at 3.30 and ended shortly after quarter to four.

Mayo managed to score three goals in the first period but, even so, at half-time there was a general feeling that it was all over bar the shouting. And nobody was shouting. Instead, there was a serene calm in the stadium as the supporters from both counties settled into what was a golden September afternoon – appropriately hued in green and gold.

Kerry had been favourites, all right, but had been almost indecently businesslike in their rapacious claiming their latest Sam Maguire. To the Mayo tribes, the day was a sickening reprise of the final just two years earlier when Kerry had also trampled over their dreams, hurrying to a win as if they were hoping to catch the 4.55 express from Heuston.

The summer of 2006 had been a hugely emotional one for Mayo. The team were guided by the instinctive and unorthodox approach of Mickey Moran and John Morrison, whose absolute faith in their men was rewarded when Kieran McDonald curled an immortal winning point against Dublin in the All-Ireland semi-final. The drama of that win – and the preceding battle for Hill 16 – made it tempting to think that the year was fated, divinely tilted towards a Mayo breakthrough. Fifty-five years and counting. Kerry ended that conceit with a thoroughness that was crushing. It was like watching a funfair being disassembled by a rigorous crew of roadies: all the make-believe and magic was boxed up and driven away in articulated trucks.

Now, O’Connor told those gathered in the Mayo dressing room that Kerry’s hurt was somehow more urgent and pressing than Mayo’s had been: that the torment they felt at losing the 2005 All-Ireland to Tyrone had driven them. It didn’t make sense. How could a county who had won an All-Ireland just two years earlier want and need it more than a county whose quest had become Biblical? But it was evidently true.

The moment caught the essential difference between two counties conjoined in the importance they place on Gaelic football. Both Kerry and Mayo are cracked about the game. But for Mayo, winning it all had somehow become an epic and romantic quest while for Kerry, it was a base-line necessity.

In 2010, James Horan became Mayo manager and the film Inception became a global sensation in the box office. Of all its audiences, surely Mayo fans must have most easily identified with Leo DiCaprio’s state of mind: the edifices are crumbling all around you and the world is never what it appears to be. But somehow you keep dreaming and re-imagining, even if you don’t get paid 10 million bucks for your faith and there’s no Oscar nomination at the end of it.

Mayo began to resemble Kerry whenever they lost finals: they took it on the chin and knuckled down to work

When Horan took charge, nobody was really thinking of Mayo in terms of being All-Ireland contenders. Nobody except Horan. The 2011 quarter-final against Kerry was the first real inkling of the new ambition under his watch: a kind of bloody-minded fearlessness crept into the approach. The huge sea-change that occurred under Horan’s first term was that All-Ireland finals ceased to become a thing of dread. Mayo lost in 2012 and in 2013, and then Horan’s term finished in the heat and dust of an unforgettable All-Ireland semi-final replay against Kerry in Limerick.

But with each of those disappointments, Horan refused to entertain the idea that losing finals was somehow fated or an inextricable part of Mayo’s DNA. He quickly and forensically analysed the game, dispensing the good and bad parts of Mayo’s performances, and vowed that the team would be back. There was no agonising. There was no dilution in the belief that the group would ultimately get there. That attitude prevailed even when he left, and, while Mayo lost the All-Irelands of ’16 and ’17, those teams had shed the suspicion that they weren’t equipped to deal with the psychic weight of those days. In fact, Mayo began to resemble Kerry whenever they lost finals: they took it on the chin and knuckled down to work over the winter.

It’s mind-boggling to think that Mayo’s Keith Higgins, David Clarke and Andy Moran were in the dressing room to hear Jack O’Connor’s words that day. It feels like a long time ago – not only pre-Trump but pre-Obama. In the local world of Gaelic football, Dublin have since that day learned to stop pretending to be contenders and have materialised into the real deal. They are the force, the empire.

Sunday’s league final brings about a reunion of Kerry and Mayo sensibilities in Croke Park. The lurching form-lines in the league have renewed the hope that this summer’s All-Ireland final might be worth playing after all; that it will be far from a Dublin procession to a fifth All-Ireland.

Over the space of three months, both Mayo and Kerry have revitalised their credentials. Both teams are at very different stages in their evolution: Kerry are ominously youthful and driven. while Mayo have a cut of the wild bunch about them – unchanging and unflinching and seemingly impervious to time. Neither James Horan nor Peter Keane has explicitly stated it, but both teams share the basic ambition of winning the next All-Ireland. It’s the only thing left to do for this particular Mayo team. And it’s the only thing to do for all Kerry teams, ever and always.

When it was confirmed that Mayo had qualified for Sunday’s league final, Horan said he was delighted and that the team could always use more games. But he sounded as though he was talking about a pitch opening. Kerry have been the form team in this league: their defeat, in Tralee, by Mayo has been the one fly in their ointment. So the supporters can expect a full-blooded dress rehearsal in Croke Park on Sunday, secure in the knowledge that both counties have their eyes on a different prize.

Kerry have won three more All-Irelands since that meeting in 2006, bringing their accumulated victories to 37. Mayo are still on three. On the cold honours roll, Mayo and Kerry never been further apart. But in the here and now, they’ve never been closer.

1 Sideline Cut: Vignette shows why Bird is the true shark in The Last Dance
2 Brendan Rodgers says he was ‘really knocked’ by coronavirus
3 Anfield and Cheltenham show sports again lacking in looking after their own
4 Farrell and O’Connell provide insight into changes in Ireland’s analysis
5 Andrew Porter diary: Meat, veg and intermittent fasting the order of the day
Real news has value SUBSCRIBE