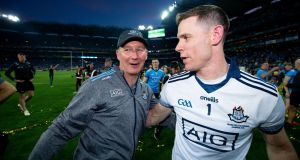 It is commonplace to see Jim Gavin mentioned together with Stephen Cluxton (pictured) and county CEO John Costello as the most influential people in the quest that was completed last Saturday. Photograph: Tom Honan

The five-in-a-row done, what is Dublin’s place in history? The obvious answer is that this will be up to others to judge. From here on ground zero, the most remarkable thing about Jim Gavin’s team is their sheer competitiveness. Five championships have taken seven finals, all but two of which ended with a just a score between the teams.

This is unusually tight by the standards of dominant teams and yet no county has been as dominant in football in the history of the GAA.

It hasn’t yet been outlandish domination. Seven All-Irelands in a decade may be a benchmark in football but Kilkenny hurlers did it just 10 years ago. The next best in football is Dublin themselves in the 1890s with six but Kerry managed five in two of the last four decades.

The point is that the champions aren’t particularly distant outliers in terms of All-Irelands even if they are clearly in elite company.

But look at other indicators: a record-breaking unbeaten run in league and championship between 2015 and ’17, half of the decade’s national league titles and four of the old under-21 All-Irelands in the eight years until the grade was revised down to under-20 and made developmental rather than elite.

There have been fundamental influences on these achievements. Pat Gilroy came in as manager for 2009 and transformed the team from flat-track bullies in Leinster but soft touches elsewhere into All-Ireland winners.

That much-abused word “culture” is often used to describe what he changed but he also found new players and devised a more secure system of play in which the team eventually thrived.

His successor, Jim Gavin, took care of the other six All-Irelands in the nine-year period, implementing radically different styles from all-out attack to a more defensively aware possession game, aimed at deconstructing the blanket that had smothered them in the 2014 All-Ireland semi-final.

It is commonplace to see Gavin mentioned together with his captain Stephen Cluxton and county CEO John Costello as the most influential people in the historic quest that was completed last Saturday.

The eternal Cluxton. His goalkeeping displays this year have catapulted him back to the top of the positional rankings – not that he was realistically far off them in the six years since getting his fifth All Star. His restarts have been items of discussion since the middle of the last decade when it was first worked out that he had almost become a puppeteer at kick-out time.

Yet in terms of the team, the weekend’s yarn told by Gavin about the goalkeeper’s reaction to Killian Spillane’s goal in the drawn final, encapsulates arguably the most important element he Cluxton brings to the team: the driving of standards. It is of course a cliché but like most of them it’s simply a hackneyed way of framing an essential truth.

When the captain – who, it should be emphasised is in his 19th season and 38th year – spends a few hours on a laptop analysing his footwork when failing to save that Kerry goal, how can younger players slacken in their attention to detail?

Costello has been at the wheel in Dublin for a quarter of a century during which he has overseen a modernising revolution. With development funds flowing from, initially, the Irish Sports Council, and maintained by Croke Park, the profile of Gaelic games in the capital has been transformed.

The sheer population of the capital has always carried with it the apprehension that if properly exploited, it could capsize the GAA.

The funding issue and Dublin’s success are separate matters. It’s not that the development money hasn’t had an impact – of course it has but in a way that benefits the GAA by raising participation levels and when that happens, population numbers kick in.

In an interesting piece by Kieran Shannon in last month’s Examiner, coaches from outside Dublin, who have been involved in development work in the county, gave their opinions.

Gregory McGonigle, from Derry, and former coach of the Dublin women’s team, emphasised what he saw as the primary advantage.

“To say the [games development] funding hasn’t been a contributing factor would be wrong. But the population base is the big advantage. For every good GDO like a Páraic McDonald (Kilmacud Crokes), you can have a bad GDO. For me, it’s a numbers game.

“I remember once hearing that Russian boxing only needs one in 10,000 to become a world contender whereas Ireland needs one in every five. For a Derry or Monaghan to have a good county team, you need every club to produce a county player. In Dublin it only has to be one in every three clubs.”

That population advantage isn’t transient and for all the disadvantages Dublin GAA faces – the need for more clubs and the price of property – there are obvious benefits, like public transport and the availability of a world-class venue in Croke Park, while counties like Cork and Mayo struggle to pay stadium debt.

The 2002 Strategic Review Committee report recommended that Dublin be split in two: a logical response to population size, as indeed would be a four-way split into local government regions – but how would that impact on the GAA?

Built on the whole platform of county identity, the association has tolerated rampant inequalities of outcome at a competitive level without exhibiting too much concern down the years. If this is sufficiently different, it will require radical solutions.

How enthusiastically would the city’s Gaelic games community embrace new identities like Dún Laoghaire-Rathdown or Dublin City or Fingal?

One rugby coach remarked that he couldn’t understand the fuss about Dublin’s funding – simply because whatever was being done was working so well and he didn’t mean five-in-a-rows but the competitive presence to attract youngsters to play. It is understandable why the GAA mightn’t want to compromise that.

Maybe Jim Gavin and Stephen Cluxton – and a host of other older players – will step away from the inter-county arena, having made history.

If so there would no guarantees about Dublin’s continuing success in the short- and medium-term future but, regardless, the continuing growth of the city population is fast becoming an existential issue for the GAA and surely deserving of a dedicated committee of review to plot a way forward that doesn’t sacrifice gains made.