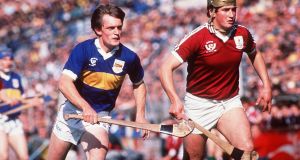 Nicky English (L) and Conor Hayes, pictured in the 1988 All-Ireland final, have been inducted into the GAA Museum Hall Of Fame. Photograph: Billy Stickland/Inpho

The GAA Museum Hall of Fame’s latest induction honours players of the late 1980s in both football and hurling. Included is Tipperary All-Ireland hurling winner as both player and manager, Nicky English, who is also the long-standing Irish Times hurling analyst, in which role his experience and insights have made him an authoritative voice on the modern game.

He is recognised for the longevity of an outstanding career on the field, winning six All Stars in seven years, 1983-89, and spearheading Tipp’s ending of its Liam MacCarthy famine in 1989 and winning again in 1991. He was Hurler of the Year in that first year and managed the county to the All-Ireland in 2001.

His pace, skill and lethal finishing made him one of the most dangerous forwards of his era, scoring 2-12 in the 1989 final against Antrim. He also has the unusual distinction of never having lost a Fitzgibbon Cup match during a career with UCC that yielded five medals.

By coincidence, one of his great rivals, Conor Hayes, captain of Galway’s back-to-back All-Ireland champions in 1987-88, has also been inducted.

An All-Ireland club medallist with Kiltormer in 1992 and All Star full back in three successive years, 1986-88, he also managed Galway to an NHL title in 2004 and to an All-Ireland final a year later.

The hurling induction also honours Terence ‘Sambo’ McNaughton, the first Antrim player in the Hall of Fame. A long-standing player with his county, he was corner forward on the team that reached a first All-Ireland final in 46 years when defeating Leinster champions Offaly in the semi-final before going down to an English-inspired Tipperary.

He was also an All Star at centrefield in 1991 and was named at wing back on a special, commemorative Team of the 1980s. He has been involved in management with Antrim and has acted as a consistent voice for hurling in Ulster.

The football induction features three history makers. Denis ‘Ógie’ Moran is one of five members of Mick O’Dwyer’s legendary Kerry teams of the 1970s and ‘80s to have won eight All-Ireland medals on the field of play.

As a young teenager, he moved from Limerick to Ballybunion. A versatile player, he became a totem for the team at centre forward where he won all eight Celtic crosses.

Colm O’Rourke is a familiar face from his many years as an analyst for RTE’s Sunday Game. Originally from Leitrim, his family moved to Meath in his early years and in the 1980s he was part of Seán Boylan’s team that became the first from the county to win back-to-back All-Irelands in 1987-88. A rangy and accurate full forward or corner forward, he was awarded three All Stars and named Footballer of the Year in 1991.

He also managed the successful Ireland team of 1998-99, the only one to win two test series in succession against Australia.

One of his big rivals at the time was Cork’s Larry Tompkins. Originally from Kildare, he moved to Cork, via New York, in the late 1980s when he became a key member of Billy Morgan’s first Cork side to win successive Sam Maguire’s in 1989-90.

The latter year was historic because he was captain of the football team that completed only the second double of the 20th century - Cork’s hurlers having won their All-Ireland two weeks earlier.

Tompkins went on to manage Cork to the 1999 NFL title and later that year to an All-Ireland final where they lost narrowly to Meath.

Personal objects from each of this year’s inductees, including medals, jerseys, awards and other sporting memorabilia are on display in the GAA Museum’s Hall of Fame. This permanent exhibition is one of the museum’s most popular attractions and includes match footage featuring all 54 Hall of Famers, narrated by Mícheál Ó Muircheartaigh.

The GAA Museum Hall of Fame was established in 2013. At the first induction, then GAA president Liam O’Neill said: “Former players have a special place in the history of the GAA and nowhere is this captured better than in the GAA Museum where their achievements are highlighted and revered.

“This new facility will serve as a permanent reminder to the greatness of the players who adorned our game at the highest level. It is important that these players are remembered not only by those who were lucky enough to see them, but crucially by those who did not have that privilege.

“This is one way of assisting in that process and I congratulate them and their families.”

At its foundation it was based on the GAA Teams of the Millennium from 2000 (see below) and the decision was taken to bring in new players from five-year periods, starting in 1970. This year’s induction honours those who were playing in the 1985-1990 period.

It is intended in the future to induct players from earlier in the association’s history to ensure representation from the first 50 years of the GAA.

Team of the Millennium 2000

Team of the Millennium 2000