Even by Kerry standards, this would be an immortal win

Kerry face a huge challenge on Sunday, but Dublin, in a way, face an even greater task 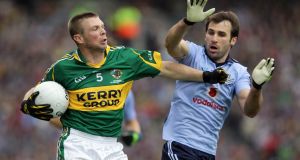 Tomas O’Se of Kerry with Bryan Cullen of Dublin in the All-Ireland SFC final in 2011. Photograph: Donall Farmer/Inpho

Dublin-Kerry: it’s become like one of those genetic sequences that has mutated drastically in a short space of time. Suddenly Kerry, comfortably the more successful county throughout the 20th century, are faced with the task of preventing their previously compliant rivals from achieving the one thing that has eluded generations of footballers, including their own.

This decade has seen a whole lot of historical tables being overturned and a sense of anarchy breaking out in what had been a highly regulated environment.

For Dublin to win on Sunday would require them to establish another record and not just the five-in-a-row. The county has never defeated Kerry in three successive final meetings. In fact, no one has.

There was a timely re-run of the 1985 All-Ireland final on TG4 on Monday. It was one of the seemingly infinite number of Kerry-Dublin finals during that era. Just like Tipp and Kilkenny in the recent hurling final, football’s most common final pairing was marking six occurrences in 11 years.

In keeping with a pattern that had no apparent effect on purveyors of legend and nostalgia, the Dubs won just one of those six contests, in 1976. Certainly they weren’t winning in 1985, which in some ways captured the essence of the rivalry.

Kerry weren’t quite running on empty and would win another All-Ireland a year later to complete a three-in-a-row, as a kind of postscript to their four-in-a-row of 1978-81, but the end was in sight.

Dublin weren’t likely to be bringing it about, though. The team that picked up a serendipitous All-Ireland in 1983 got their reality check the following summer in Centenary Year against a rebooted Kerry warming up for their lap of honour.

The 1985 final, which would be Kevin Heffernan’s last in charge of Dublin after about 40 years’ involvement with the county’s teams, was peculiar because Kerry were running away with it for most of the 70 minutes, leading by nine at half-time; but it was a lot closer by the end.

Just as Dubliners began to grumble that the “rivalry” with Kerry was hardly worthy of the name given its one-way nature, they suddenly, unexpectedly won

Dublin struggled against the obvious direction of the match, and two goals by Joe McNally helped to cut the margin to a point, a margin that was restored to four before the final whistle.

The odd thing about rewatching it on television is that it looked quite exciting and projected a drama that never quite presented itself on the Canal End, where it never occurred to me that Kerry wouldn’t win.

Maybe that was simply the pessimistic tendency in the crowd, but in general it always felt that Dublin would ultimately know their place in these contests – and that’s what the statistics upheld. The 1976 All-Ireland – Dublin’s first over Kerry in a final in 53 years – was such an achievement that it persuaded Heffernan to walk away because his work was done and Kerry had been beaten. Tony Hanahoe’s follow-up with the fabled 1977 semi-final meant that the team had back-to-back wins over their rivals but they were the only successes in 18 championship encounters.

The irony of 2011 was that just as Dubliners began to grumble that the “rivalry” with Kerry was hardly worthy of the name given its one-way nature, they suddenly, unexpectedly and amidst drama that wouldn’t be out of place in a Greek amphitheatre, won.

Kerry were magnanimous, presumably believing that this turn-up would as a consolation at least fuel a couple more decades of “great rivalry” talk; but, having seen the “back-to-back” barrier broken, Dublin are now one match away from a third final victory and doubling the height of that previous barrier.

The great characteristic about Kerry is that they simply tot up titles. There was fervent dispute for a while 10 years ago about “the team of the decade”. By any normal calculation, the county with five All-Irelands would trump the one with three, but Tyrone’s advocates said that they hadn’t lost to Kerry in three championship meetings.

When a county has the biggest pile of senior All-Ireland titles in the world, there are naturally ones that stand out in the folk memory

The All-Ireland roll of honour is, however, normally without context. Memorably, at the 2005 All-Ireland media evening, then manager Jack O’Connor, tiring a little of the constant questions about “what it would mean” to beat Mickey Harte’s team, fired back that it wasn’t as if they were giving out two All-Irelands for the upcoming final.

That, by and large, is Kerry’s way. All-Irelands are a transactional process: you win or you lose.

When a county has the biggest pile of senior All-Ireland titles in the world, there are naturally ones that stand out in the folk memory. Sunday’s opponents loom large in one of them. The background to the 1955 final is fairly well known at this stage: the tactical innovation of Dublin and their intense preparations against the proven orthodoxies of Dr Eamonn O’Sullivan’s fixed-position play. City against county. Record attendance. Emphatic win for Kerry.

Nearly 40 years later and until his death, John Dowling was still celebrated in the coffee houses around Rock Street as the captain in 1955, and affectionately characterised by Mike Sheehy as “The Ayatollah”.

It has been noted this week that Kerry responded with far more urgency to the prospect of losing the first All-Ireland against neighbours Cork in 2007 than their opponents did to the prospect of setting a landmark against their historic oppressors.

The corollary of special All-Irelands is ones that never were. Topically, 1982 has come again into focus as the last time a five-in-a-row was up for grabs. It haunts the county to this day. Manager Mick O’Dwyer told the 2018 documentary Micko that he still thinks about it once a week.

A friend from Kerry was said to be in a quandary over whether to win the semi-final against Tyrone, as he didn’t want green and gold jerseys on the field when Dublin picked up football’s Golden Fleece.

Jack O’Connor was, of course, right. They only give out one All-Ireland per final but, even by Kerry standards, this one would be immortal.