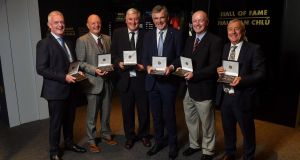 In the wake of Dublin’s five-in-a-row success, their 29th All-Ireland win, former Kerry manager Éamonn Fitzmaurice looked to the bigger, and slightly concerning, picture for the Kingdom.

“The roll of honour is a more important thing to protect and that becomes a challenge for the next decade,” said Fitzmaurice, noting Kerry’s 37 wins.

Colm O’Rourke, inducted yesterday into the GAA Museum’s Hall of Fame, couldn’t offer much solace in that regard and predicted that Dublin are only going to eat into that margin in the coming years.

“I think it’s not going to stop,” said O’Rourke of Dublin’s domination. “I think they’ll do six-in-a-row next year because they are supremely motivated. People say, ‘Sure they’ll get fed up of winning’, but there’s no sign of that.

“I would know quite a few of them very well and I’m amazed by the motivation. If there was another game next Sunday they’d just love to play. I think they have that love of the game.

“People say, ‘Why do you play football?’ You play for enjoyment and Dublin are not going to stop playing just because they’re winning. In fact, that may increase their motivation to win because they enjoy it so much.

“They are great role models, they are modest and they have a degree of humility about them which comes from Jim Gavin and Stephen Cluxton. They are a sort of model team who could keep on going indefinitely.

‘Waiting in the wings’

“If you look at the Dublin under-20s, you have young Ciaran Archer, Peadar Ó Cofaigh-Byrne, who are going to come on, Sean Bugler from Oliver Plunkett’s. In any other county team, they would be straight in, so they are waiting in the wings.”

Inevitably, players like Paddy Andrews, Kevin McManamon, Cian O’Sullivan, Michael Darragh Macauley, Philly McMahon and Bernard Brogan will retire in the coming seasons, some of them probably before 2020.

“But the best part of the team is nearly the youngest part now when you look at Brian Fenton, Brian Howard, Jack McCaffrey, Con O’Callaghan, Paul Mannion, Ciaran Kilkenny, those fellas are not going anywhere,” responded the Meath great. “The six really best players at this stage, their main driving force, are in their peak years; 24, 25, 26. And they love playing. So I think it’s curtains for a lot of teams for a while yet because I don’t see them disimproving.”

But what if Cluxton, who turns 38 before the year is out, calls it quits – could that be a game-changer?

“Cluxton has trained in Evan Comerford who has shown during the times he has played . . . now, he may not be as good yet but he will be good enough for any team,” said O’Rourke. “So I don’t see him going as changing things that much. What he has done is he’s set the standard. It does look as if Evan Comerford has taken up the torch there, shown himself to be on the same upward trajectory for quality of kicking and everything else that Stephen Cluxton has set in place.”

O’Rourke has been championing the idea of splitting Dublin into at least two representative teams for years, to address the perceived imbalance that exists between the capital county and the rest.

“The top five or six club teams in Dublin would beat all the county teams in the third and fourth divisions in the league,” argued O’Rourke. “It’s a messy business, drawing up a new county, who plays with who, but the GAA isn’t an organisation which was built around principals of professional sport where you can have domination and things like that.

“The only other way, if they’re not going to divide Dublin, is there has to be some way where a lot of the very good club footballers in Dublin are either encouraged to go and play with other counties for some reasons, with parental rules or some type of transfer system.”

Two-time All-Ireland winner O’Rourke was speaking after being inducted into the GAA Museum’s Hall of Fame. The Sunday Game analyst was asked about the furore over colleague Joe Brolly’s apparent snubbing for work on the All-Ireland final replay transmission.

“I don’t know what has happened there, I’m not privy to what has taken place but hopefully he’ll be back next year,” said O’Rourke, who acknowledged the modern airwaves are more sanitised.

“I certainly would be more careful now that I would have been in the past. We live in a much more politically correct world. Joe would be the exception to that, I suppose. I think he’s a loss to punditry. And of course at times he can drive me as mad as anybody else but I think the last thing you need is blandness in commentary.”