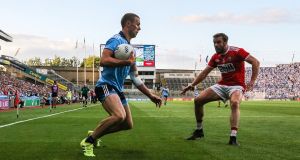 The GAA announced on Monday the decision by Saturday’s GAA Central Council meeting that next month’s special congress in Páirc Uí Chaoimh will consider three football rule changes and the introduction of a Tier 2 championship.

The proposal aimed at potentially limiting Dublin to one Croke Park match in the Super 8 series will, however, have to wait until the next full congress in 2020.

That is because the matter was discussed at last February’s annual congress in Wexford where a motion from Donegal, declaring that no county could play home matches in Croke Park – code for taking Dublin out of the headquarters venue for one of their fixtures – was heavily defeated.

Given that Central Council is now proposing to give to the Central Competitions Control Committee (CCCC) the power to fix what was previously the Croke Park round of fixtures for any venue – in other words, essentially to revisit something previously before congress – it was decided that the annual decision-making body should have the final say.

It is part of a package of tweaks to the All-Ireland quarter-final round-robin series – or, in the vernacular, the Super 8s – as they enter the third year of a three-year trial.

In a sense, the changes have been chasing each other’s tail. Originally the Croke Park round was Phase 1 of the quarter-finals and featured the provincial champions playing each other. In the first year of the trial that meant Galway-Kerry and Dublin-Donegal.

Donegal’s dissatisfaction with the model was based on the provincial champions not getting any advantage from their status, as they were being made play arguably their hardest matches on the first weekend.

The rationale behind that format was to prevent dead rubbers taking place by pitching what were expected to be the strongest teams against each other in Phase 1 so that they would take points from one another.

When the CCCC responded to the Donegal argument, it was to give the provincial champions a home match first. This year that tweak contributed to a couple of dead rubbers in one of the groups, with Dublin and Tyrone being able to name shadow teams for their match in Omagh, as both had already qualified for the All-Ireland semi-finals.

It didn’t work out for Donegal either, as they were drawn to play Mayo in Castlebar in their last match, which they duly lost and failed to qualify for the semi-finals.

In an attempt to fix the latest discrepancy, it is being proposed that the winners of Phase 1 play each other in Phase 2 so that only one team per group can go into the final weekend on two wins.

It is believed that the CCCC will reserve the right to fix Dublin matches for Croke Park if the likely attendance makes that necessary.

Central Council also selected the least-complicated format for a Tier 2 championship: a competition for Division Three and Four counties, unless they reach a provincial final, that will start as soon as the relevant counties have been eliminated from their provincial championships.

A last-minute call on Friday evening by players’ body the Gaelic Players Association (GPA) for Central Council to defer a decision on this, pending the completion of the report of the fixtures work task force, was rejected and the GPA did not seek to raise the matter at Saturday’s meeting.

Rule changes that will be debated are familiar from the AFL earlier this year. Five suggestions made by the Standing Committee on the Playing Rules (SCPR) were trialled in the pre-season competitions, but one was controversially dropped before the league – the restrictions on the hand-pass – and the other four adopted.

Of those four, the prohibition on kicking line-balls backwards has been dropped, as it wasn’t felt to have made any difference, but the other three will be debated.

The kick-outs from 20 metres is probably the least contentious, but there is also believed to be support for the attacking mark and the introduction of a 10-minute sin bin – despite significant misgivings about what is seen as a softening of the black card punishment, which currently requires the offending player to be replaced for the duration of the match.

The attacking mark was reasonably popular although, for some, it entailed a slowing-down of the game, as it enables an attacker to catch a ball and halt play – the option of playing on is also there – in order to take a free kick.

Football rule changes
All kick-outs to be taken from the 20-metre line.

An attacking mark to be awarded when a ball is fielded having been kicked at least 20 metres inside the opposition 45.

Punishment for black cards to be eased from immediate substitution to 10 minutes in a sin bin.

Tier 2 football championship
New championship to be contested by 16 counties from Divisions Three and Four of the AFL, except those who qualify for their provincial final. Competing teams will go straight into an open-draw, knockout format as soon as they are beaten in the provincial championships. The All-Ireland qualifier series will accordingly be shortened from four to two rounds.