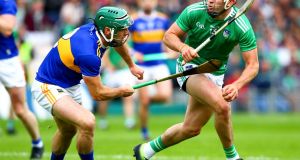 A scan on Cathal Barrett’s injured hamstring on Tuesday night has revealed a “mild” tear.

Tipperary take on Limerick in the Munster hurling final on June 30th, two weeks after Barrett limped off against the same opposition. Tipp beat Limerick last Sunday to make it four wins from four in the Munster round-robin, but paid a heavy price with Patrick ‘Bonner’ Maher tearing his cruciate ligament and Barrett possibly being ruled out of the provincial decider.

The corner-back was essentially ruled out of the encounter by his manager Liam Sheedy on Tuesday. Talking ahead of the scan results Sheedy said he expected Barrett to be out for three to four weeks.

Tipperary GAA released a medical update close to midnight, which gives Barrett some hope of surprising his manager and playing his part as Tipp look for a first title since 2016. The update reads: “This evenings scan for Cathal Barrett has confirmed a mild hamstring tear. The injury will be worked on by the Tipp SH medical team and management will monitor his progress over the next 10 days.”