Joanne Riordan: Succeeding Eamon Ryan left him on a hiding to nothing 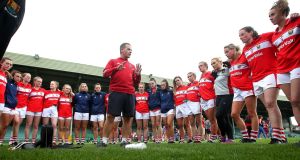 Cork manager Ephie Fitzgerald talks to his team. In truth, it is another rebuild for Ephie and his management. Photograph: Bryan Keane/Inpho

The 12 months of 2018 left a bit of a sour taste in the mouth of Ephie Fitzgerald and Cork women’s football supporters and even the team itself – unless of course, you’re from Mourneabbey, where the sweet taste of All-Ireland glory masked the defeat to Dublin just a few months previously. But, for the rest of us mere mortals down in Cork, we wrestled with the thought of a potential dominance (and hated it) and wondered if the Cork girls could bounce back.

We know the bounce back ability Dublin have. It takes an extraordinary team to lose All Irelands in horrifically close circumstances to rally together for another year and go again. Some questioned whether the Dublin team were satisfied with their success, but if anyone knows this Dublin side, success only drives them on for more. After all, what is better than the sweet taste of victory?

When the Nemo Rangers clubman took over Cork in 2016, many were asking whether this job would be a poisoned chalice. We’ve seen it time and time again. Post-Pep Guardiola Barcelona slipped bit by bit, with the final hammer blow coming in 2014 when Argentine Gerardo ‘Tata’ Martino went a whole season trophyless and resigned after just one season. Success can most certainly breed success, but, unfortunately, father time can catch up. Extended senior championship runs, and an elongated club championship can make any well conditioned side weary. Ephie had a challenge on his hands.

But the most underrated challenge was the one the fans could not see. In Eamon Ryan, the Cork senior women’s football team had a father figure, a coach, a mentor, a man whose job description roamed from head cook to bottle washer. Ryan did everything and anything in between.

But that Cork team of 2016 faced into adversity and the unknown, emerging in an All-Ireland final victory that broke attendance records and even had a shroud of controversy after the infamous “point or no point”.

So step one was complete for Fitzgerald and co, and what a step one it was. Of course, a team that had won 10 All-Irelands in almost as many years expected that glory once again. After that All-Ireland victory Ephie heaped praise upon his senior stalwarts, comparing them to Roy Keane because of their will and desire to win. He also said the reason for their success was their humility and their utmost respect for each other, the team, the jersey and the game.

But, things took a turn in 2017, from a Cork perspective, anyway. The team had their worst record in recent years, failing to reach the Munster final and getting dumped out by Mayo in an All-Ireland semi-final proved that proved the Cork team had to look to the future rather than the past. In total, 57 All-Ireland medals and 29 All-Stars worth of experience left the panel, either retiring or just switching codes.

So, now Ephie had to look at what the up and coming talent was like. A helping hand was John Cleary, who Fitzgerald had a great relationship with, and had just masterminded an underage revolution. For context, and to highlight how much of a mammoth task the rebuild actually is, 13 of the panel don’t have a single All-Ireland medal between them, while the remaining 17 have a combined total of 67.

In fact, current full back Eimear Meaney and dual sensation Libby Coppinger were unused subs the day Cork beat Dublin to win their last All-Ireland over three years ago. Half-back Maire O’Callaghan and midfielder Hannah Looney could not even make the panel of 30 and were listed among the extended panel. On top of that, speedy wing back Melissa Duggan, halfback Emma Spillane and impact sub Saoirse Noonan were not even members of the panel.

But a quick flashback shows that the girls who were minor from 2015 to 2017 have the same levels of hunger and desire. They are consistent All-Ireland winners, and while appearing on the senior platform is a step higher with added pressure and more eyes watching your every move, Looney and Coppinger have already cemented their senior status in the other code, winning back to back All-Ireland camogie titles.

In truth, it is another rebuild for Ephie and his management. As he said himself minor All-Ireland experience does not necessarily translate to senior success. But, just like Ryan did way back, Fitzgerald and his backroom staff have the chance to mould their own team for the future and leave their own stamp on Cork LGFA and even design their own blueprint for success.

Sure, it’s harsh to judge a manager solely based on titles, and it’s even harsher when your predecessor cultivated a team for ages. Success is relative. Cork don’t want to be a top-two or -three team, they want success. And the only success that can sate these girls’ appetite is the Brendan Martin Cup.