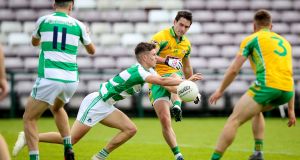 Corofin’s Michael Farragher is blocked down by James Webb of Oughterard during their clash last week. Photo: Tommy Dickson/Inpho

The dispatches from Galway’s football championship in its early stages underline the extent to which Corofin’s huge achievement in 2020 has been obscured by other events.

It feels like another world, looking back to January when they became the first club in GAA history to win three successive All-Ireland titles. Certainly the move away from the traditional St Patrick’s Day final lowered the profile of the achievement but in the light of what happened next, had the date not been switched there would have been no club finals.

Former Galway footballer and manager John Tobin, now the retired Connacht Games Development Manager, said that it was always on the cards that the All-Ireland champions would be in better form this year even though they are now unbeaten in 47 championship matches, having opened with two thumping wins against Oughterard and Monivea-Abbey.

“People were saying to me that for whatever reason, Corofin wouldn’t be as good this year. What they don’t realise is the supply line that Corofin have consistently worked on and developed all through the underage structure. The last day you could see a number of players they were missing but in those absences, also the quality of the replacements.

“Another reason why they’re particularly strong this year compared to recently is that a tradition began to creep in of some of their players going off to America during the summer and not coming back until September when the championship was in its second phase.

“This year they’ve had all of their players at home all along.”

Unfortunately for the club, who have now won five titles, the GAA took the decision not to play provincial and All-Ireland championships at club level this year. For Tobin, that has come at a cost for the champions.

“My opinion is that unless a local derby is to catch them this year – the way we (Tuam Stars) nearly did last year and Salthill are coming too and maybe Mountbellew – they would have got out of Galway and if they’d done that they would have won the All-Ireland – making it four in a row.”

In fact only four other clubs have won three or more All-Ireland football titles and none have managed them in successive years.

There is no doubt that Corofin have established themselves as the most successful team in either hurling or football with their three-in-a-row but Tobin also believes they objectively stand comparison with the best football sides in the championship’s history.

“There was a brilliant era early in the history of the championship where the big rivalry was in Munster between Nemo Rangers and Austin Stacks and I remember seeing those matches and they were fantastic sides; both of them went on to win the All-Ireland. They were very talented and balanced teams of good footballers. Crossmaglen more recently were similar.

“I’d say about them all that they were so comfortable on the ball and so skilful. Using a topical comparison from soccer – Liverpool – they’re doing things instinctively, moving into position sub-consciously and you think to yourself that looks so simple and so fluid and so spontaneous but that’s because of their ability, movement and game sense. That takes a lot of hard work.”