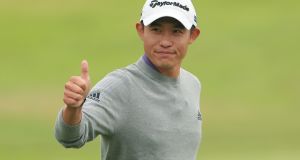 Collin Morikawa will not shy away from any sense that victory at the 102nd US PGA Championship is just the beginning. Golf’s latest Major champion, who is just 23 years old, has grand plans.

Morikawa emerged, ultimately in a comfortable manner, from a Harding Park field in which stellar names - Dustin Johnson, Jason Day, Paul Casey, Justin Rose, Brooks Koepka - could not keep pace. A sensational 291-yard drive to within eight feet of the hole at the 16th on the final day endorsed the champion’s state of mind. With 38 days until the US Open gets under way at Winged Foot, Morikawa wants to ride the wave.

“It doesn’t stop here. I’ve got a very good taste of what this is like, what a Major championship is like. I really do miss the fans. I know we all had to have some type of adjustment [to] not having fans; when fans do start coming back hopefully at some point, it’s going to be an adjustment, but this is where I want to be. I love it.

“I’m trying to win every single week. I’m not trying to come out and just win the Majors.”

Morikawa, now the world’s fifth ranked player, has three professional wins and a sudden-death play-off defeat since graduation from Berkeley. He has missed just a single cut. Media attention, while now more intense, is not new. “I love talking to you guys, whatever you guys say,” he said. “I love hearing what you guys have to critique or whatever it is. It’s all for me to take in and filter out what I need or what I don’t need.

“Expectations are what you put on me. That is what I filter out and what I don’t hear because I have set goals.”

Fellow competitors are glowing in their praise of the Californian. “He’s a hell of a player,” said Koepka of the man who succeeded him as US PGA champion. “He’s really good. You see these guys coming out of college now, they are ready to win, and this is a prime example. I think of that group - him, [the world No 36] Matt Wolff, [the world No 30] Viktor Hovland - it’s impressive what they do. They come out of college and they’re ready to play out here.”

JJ Jakovac, Morikawa’s caddie, is the envy of his fellow bag men. “I’m in awe watching him play,” said Jakovac. “All my caddie friends say the same thing. They’re like: ‘I just cannot get over how mature your guy is.’ He’s like an old soul or something.

“The confidence is a quiet confidence but it’s super-confident. It is a major and it’s a big deal, but I think that’s what he believes he should be doing right now. Like in his heart, he knows that he’s one of the best players in the world and why not?” Why not, indeed.

Morikawa was born just 63 days before Tiger Woods claimed his maiden major, the Masters of 1997. In the stroke-play era of the US PGA, only Rory McIlroy and Jack Nicklaus have won when younger than Morikawa. “It’s great company,” said Morikawa.

“It’s been crazy because this entire start of my professional career, I see all the things comparing to Tiger and doing all this. Tiger is on a completely different level, I think we all know that. But any time you’re in the conversation of the greats, Jack, Rory, Tiger - no matter who it is - if you’re in that conversation, you’re doing something well.

“I did my four years in college, which was obviously worth it. There’s just that extra sense of feeling good in my heart, to finish out, get my business degree, graduate, come out here knowing I’m prepared, and knowing that it’s possible. When you feel you’re ready, you’re ready, but to be in the conversation with those guys it’s very special.”

Woods has made tentative noises about playing from the start of the FexEx Cup playoffs, which begin in Boston next Thursday. After an insipid share of 37th at Harding Park, Woods’s caddie Joe LaCava admitted his employer is in need of competition.

“He needs to tighten up his short game a little bit,” said LaCava. “You just keep working at it. To me, it’s just a lack of playing tournament golf. You can’t duplicate that at home. He was on lockdown, so I get that. It’s not a complaint, just a fact. But I just think he needs more reps at this point.” - Guardian