Shane Lowry best of the Irish as Todd leads in Memphis 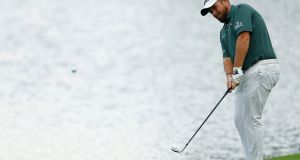 Shane Lowry plays a shot on the 12th hole during the second round of the World Golf Championship-FedEx St Jude Invitational at TPC Southwind Memphis, Tennessee. Photo: Michael Reaves/Getty Images

Brendon Todd’s consistent ball striking and exemplary putting allowed him to take a two shot lead at the halfway point of the WGC FedEx St Jude Invitational at TPC Southwind in Memphis. Rickie Fowler’s flourishing finish with birdies on the 17th and 18th holes saw him emerge alone from the pursuing pack.

The 35-year-old American, Todd, produced a measured, blemish-free 65 on foot of five birdies and is beautifully placed to try and grab a third victory on the PGA Tour this season, following tournament wins in successive weeks last November in the Bermuda Championship and Mayakoba Golf Classic.

From an Irish perspective Shane Lowry, starting on the 10th, had momentum moving to five under after eight holes with three birdies but a bogey on the 18th and another on the Par 5 third were the only deviations from par and he eventually signed for a 69 that promised to be so much better. Graeme McDowell (70) was the epitome of solidity, a single dropped shot offset by a lone birdie.

Rory McIlroy shrugged off a disappointing opening 73 with a truer representation of his talent, shooting a four under 66 that contained five birdies but he still lies 10 shots behind Todd with 36 holes remaining. His primary concern has to be ironing out the kinks ahead of next week’s US PGA Championship.

Conditions were a little more benign in terms of Thursday’s gusting wind - it picked up for the later starters - that rendered club selection tricky at times but the corollary was that the greens were firmer and less receptive. Todd was a model of control for the most part and on the rare occasion that he did get out of position he possessed the wherewithal to salvage the situation.

He admitted: “On 16, I just drove it behind the trees on the left and was too aggressive on the lay-up ending up in a fairway bunker. I hit it over the green which wasn’t a bad spot, but was able to chip it up there and make it.

“I just grinded very hard and made some clutch putts. Yeah definitely the wind was down a little bit. There were a few pins that were a bit more difficult on one, 14 and 16; there were a couple of birdie opportunities but you still have to place the ball and make the putts.”

The overnight leader and defending champion, Brooks Koepka - he started on the 10th - looked like he was going to continue in the same vein to his opening 62 but, despite a couple of birdies, his assurance on the greens deserted him. His homeward journey proved a bumpy ride, requiring 38 strokes, three over regulation figures for a 71.

Koepka demonstrated his sense of humour when his ball came to rest in almost an identical spot in the trees on the Par 4 seventh to a lie that Bryson DeChambeau had drawn the previous day. On that occasion DeChambeau called for a referee and plea-bargained for relief on the basis that he had seen a fire ant and/or a red ant in the vicinity of his ball and it could therefore be dangerous.

It was a ludicrous entreaty and one that was correctly dismissed but when Koepka drew a similar lie, he could be heard by the commentary team turning to his caddie Ricky Elliott and suggesting he had just seen an ant.

The American was less enamoured in his post round review when asked about the shortcomings of his game on the day. “I misread a few (on the back nine) and on the front just didn’t hit any good putts.”

He’s been working hard with swing coaches Claude Harmon and Pete Cowen as well as putting guru, Phil Kenyon. “It is just trying to figure out what is going on. We figured out what is going on with the ball striking; that’s fine I don’t need to worry about that. Putting (issues) have been going on for a while but we will figure it out.”

FAI chairman Roy Barrett predicts sense will prevail at EGM 23:00
Georgie Kelly on the double as St Pat’s move up to fourth 23:09
Lyon make Juventus wait another year despite Ronaldo double 22:41
Real Madrid crash out to relentless Manchester City performance 22:26
Li Haotong thrusts himself into the mix at US PGA 21:56
Here is your handy guide to sport on television this week